What kind of an animal are you? Story told to the mog by her 2 kits 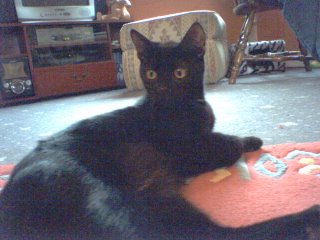 What kind on of an animal are you? Me I'm a cat, a sleek sleepy kind of cat. The kind of cat who lies in the sun and twitches as she sleeps. That's me, a cat. And, why not a cat I ask? They are of royal blood are cats. In olden times they were worshipped by Egyptians. Dearest cat was fed and praised by all who saw her. Her every need taken care of. It is much the same now for some of the feline persuasion. They wake, they look around and stretch. Stretch each and every part of them. And then its food, glorious sustenance for puss to eat before she takes a turn around the house. A once over, if you will to check that all is well with her world and once the task is done perhaps another sleep would be in order. But its not all sleep you know for our trusted friend. She prowls when you sleep, sometimes inside, sometimes out but always at her own sweet pace. Who but cat would know the number of creatures busy around the place? Who else to chastise them as they cross her path? A foolish mouse ,thinking he'll try that seed on the floor, wishes he hadn't bothered when he spies cat a twitching in the dark. Too late as she nabs him by the tail. One less to invade her space she thinks as she bites his head clean off. Cruel? Maybe but it is her house after all and he wasn't invited in.
Cats are fussy who is part of their circle. Not just any one and certainly not to be won by bribes. (Well maybe just this once, seeing as you've brought me something good to eat). I'll purr and yes you may stroke me but only until I've had enough. Not just until you are tired. No, don't lift me on your lap, we hardly know each other after all and one titbit doesn't give you rights you know.
Some people take advantage of one's good nature. Why not just keep to the stroking like I asked.
As I was saying, until I was so rudely interrupted. I am of a large family. We are descended from true temple cats. My mothers,mothers uncle used to be part of a family of traveling mummers. He taught them all he could of tricks and stories and magical sleight of hand. Sometimes he'd even take part to ensure that the standards remained high. He traveled a lot on the continent and appeared before many a well known family. Been feted by royalty great uncle has.
He was once offered a home by a lady (who shall remain nameless) with his own crested velvet bed. He refused of course. Well we do have principals and even then we couldn't be bought unless we wished it so.
He is the one who taught us how to appear invisible. That has been handed down cat to kitten since then. We have it off to a fine art you know.
Where was I? Nowhere my dear fellow, I never moved a whisker.
I couldn't divulge his secrets, certainly not! Else it wouldn't be a secret would it?
Do it again?
Why certainly...........
As told to the mog by her 2 cats earlier this morning and I believe its true don't you???
Seriously I woke this morning with this in my head:) I thought I'd share with you.
Still busy uploading stuff to ebay, when will it end? The 2ply shawl is almost there and tomorrow will see the end of the knitting. I didn't get much done of it yesterday as I was too tired and had an early night. Tonight I hope to knit if the cats don't have more stories for me of course.
at January 18, 2006

Amber,
I do like the cat story, also what kind of wool is your shawl?
Deb

thanks Deb:) The shawl is made from wool from here http://stores.ebay.co.uk/Yarnwise
and is Lace-weight hand-dyed 2 ply merino yarn shade clova. Love the finished item although had few problems with it knotting and lost a few metres due to it. Have purchased some more though:)