where do the weeks go?

Can anyone please tell me where the weeks do go to? Seems only yesterday I blogged and here we are again:) A funeral yesterday, long sad yet happy day in some ways as my dear friends mum finally passed away after fighting a brain tumour for 6 months. She would have been 94 yesterday. There were so many happy memories from people so a true celebration of a wonderful life. May the Goddess take her to her arms now.
I'm still trying to do without my pain killers much as possible but it isn't easy. I had to have 2 yesterday as the day was so heavy and thundery it didn't help at all. But my consumption of the dreaded co ds is coming down and I'm glad. I'm using more aromatherapy, more healing from DH, colour healing also. As much alternative therapy as is available.
The house situation is still in limbo, don't know when it will be. but I know it will come I juist have to be patient. Me a Leo being patient, I ask you???
Tomorrow to a pagan event, lots of talks , stalls and such and a chance to meet up with like minded people. Some good speakers, and workshops. Music at night but I suspect my 6pm this moggy will be ready for home:)
I'm in the middle of a shawl using Colinette mohair, the ribbon yarn of theirs whos name escapes me at the minute? silky chic and some lace weight yarn from Rachel(thanks so much:)). All shades or purples, blues some pink alternate rows big needles looks good. I'm just going to cast on for an amulet bag using DPNs which will be something new, thought I'd use lornas laces for it. We will see how it comes out.
So if you are at Awakenings and see someone knitting say hello:)
Now to answer comments, Sarah I had to go and buy some of those gorgeous stitch markers, thanks for thinking of me:))
Angie I purchased the Kaffe book glorious knitting and remember the shawls so well now I see them:) I to try to weave magic in to my knitting each stitch I do, especially if its for someone needy of something. Magic is mostly intent after all and as the witches say An it harm none
Ruth Spring Equinox is such a vibrant growing time yet to grow I think you have to leave something behind, trouble is that what that is isn't always what you'd want it to be at the time:)
Wye Sue, what is upstairs at Colinette, never got that far and how did you manage it? Glad they still have the dolls:)
at April 21, 2006 2 comments:

Too much death, not enough joy

Too long without writing. Many deaths in friends and acquaintances this past few weeks. Some expected, some not but none of them easy. Death such a short word for such an awful feeling for those left behind. Latest one was expected, a dear friend in her 90s with a brain tumour, mother of my best friend. She has been fighting for several months now, a tiny creature, frail but with such spirit and strength within. I salute you M, your children aren't the only ones who will miss you.
This past few weeks have been such turmoil, all the thoughts on moving to Scotland, leaving this house that I thought I'd never want to leave. I still don't and if we could magically pick it up and take it up to Scotland that would be perfect. Alas not in this world:) Still the one we want to move to is lovely, within forests, mountains and by water. A small garden or as much as Mr Moggie will want to do after this 90 foot one here. He will be able to still grow veg and herbs but on a smaller scale. Means he will have more time for his cycling and a better area for mountain biking. Where we are now is flat.
A couple of people want to rent the house if we leave which is good. So we've had this move on our minds and its not a firm date yet til the people in the house find something for them. That could be this week or 6 months. Goddess makes you wait for good stuff I've found. Maybe to see how keen we are on the move.
Then there is the deaths, then my health no better. Leg is very swollen all the time now and aches so much even or especially when I'm in bed.
I've worried over leaving my son, will he cope? But I can't live is life for him so maybe this move will help him to have to stand on his own 2 feet. My daughter will be fine she is fiercely independent. My grandsons I'll miss being so close to them but they can come for a week at a time in the holidays and they are growing up and becoming less reliant on nanny moggie.
So flux, a lot of it is the time of the year. Spring Equinox always seems to bring stuff with it. I always get itchy feet then as well and want to be outside in the woods or on the beach as much as I can, just to feel the turn of the wheel within my body and within my blood. To feel the wind and the sun vying for my body's attention. To see the birds making their nests. To watch the frog spawn on the garden pools now turning into tadpoles. The full moon Thursday was incredible, so vivid and clear. The tawny owl went over as we stood outside basking in the moonlight. The bats have now started to dance around at dusk in the garden. Spring, the best of times even when its chaotic.
On the knitting front, I've been busy finishing off a lot of tiny bags and purses. I blocked my turqoise shawl finally and it looks and feels heavenly. I've started an afghan crochet in pale shades. Not me normally so maybe thats why?
I'm itchy to start a shawl or afghan in noro kureyon don't know what pattern though. Something to do without thought so I can meditate while my hands are busy. Oh I didn't say did I? My mediations have been brilliant since I started doing my knitting with them. I'm researching medieval and beyond use of stitchery, weaving and knitting within magic. It certainly focuses your mind if your hands are occupied.
Spells were done with cords and ribbons, think that was maybe why?
at April 15, 2006 4 comments: 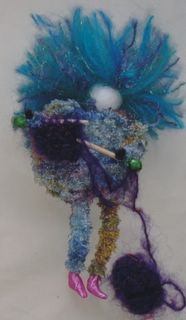 doll for A friend 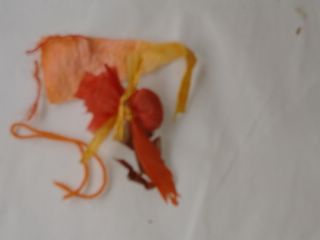 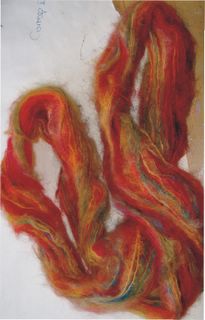 colinette mohair in this months colours 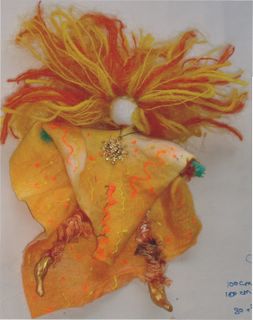 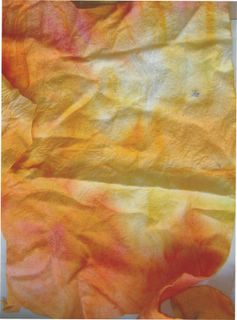 Have uploaded several pictures in line with this months colours of ORANGE and YELLOW. Firstly though a knitting elemental I've made for a friend as a thank you. She wears a hand knitted sweater in Colinette Chenille and has hand made needles with mohair knitting. She is making herself a scarf.
Next picture is a spell for prosperity in the appropriate colours. Can't tell everyone what inside though:)
Third picture is a skein of Colinette mohair this is one of my favourite of their colour schemes and I use it quite often when making fire elemental dolls.
Next in line is an April Project Spectrum elemental. She wears hand made and dyed felt cloak over Firecracker yarn clothes(Colinette naturally) and has hand made and painted gold boots. Around her neck a sun.
The next in line is hand dyed felt. I love doing felt dyeing it is such a great feeling seeing what colours come from random dyeing.
Final picture is a hand made cloak. Fabric is wool felted in parts.
As you can no doubt tell this month has some of my favourite colours. Well with a name like amber and a Leo to boot they would have to be.
Project Spectrum is available to give away. send your name and address privately to amber dot moggie at virgin dot net. I'll choose a winner Monday evening and send this one of a kind figure to you
at April 02, 2006 1 comment: