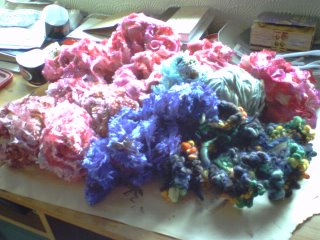 The shawl in 2 ply is coming along ok. However the yarnI purchased from ebay keeps knotting. I emailed the supplier to ask about it and didn't get much joy. I've used from the inside of the ball as she said and have had knots quite often or bits where it was almost broken through. I reckon out of the first ball I must have wasted over 5 metres that was too knotted to undo. This second ball has had a few metres also. Trouble is every so often you have to stop and unknot, it doesn't allow for smooth flow of knitting.
Ebay, well I've been listing again this afternoon and I think I can see a little daylight at last. I've still a lot of stuff to list but the items on ebay are getting bids which is good. I'm enclosing a pic here of some yarn I need to put on. Some is colinette, both firecracker and point five including a curly whirly I started and haven't bothered frogging, some I purchased thinking it was colinette(it isn't but knits up well) think there is around 650 gr altogether. Need to put that on in my next marathon. I like the yarn just got fed up working with eyelash and ribbon effects after the scarf marathon.
Eating, made roast lamb shoulder and roasted vegetables with lime for tea. Had to throw the shoulder away so we ended up with roast vegetables. Lamb raw tasting despite plenty of cooking and total fat. Part of a half lamb I purchased at our local farmers market. Back to just getting chops in future I think. I much prefer them anyway.
Watched Joan Rivers last night and really enjoyed it. She is so funny about stuff that political correctness says you shouldn't mention. So glass of wine, knitting and tv a real change for me:)
at January 15, 2006

I read over your blog, and i found it inquisitive, you may find My Blog interesting. My blog is just about my day to day life, as a park ranger. So please Click Here To Read My Blog

Hi Helen. Pity about the knots in your yarn. I have yet to try e-bay. I know what will happen once I start!

Isn't it annoying to even find *one* knot in your yarn, let alone that many! Oddly enough I coul swear that people said Noro yarns were bad for knots, just used over 2 balls with none found - maybe I'm lucky?!
Have you seen the new yarn and pattern books at Colinette BTW? DH muttered something about "no wonder we're skint" LOL when I said I'd ordered the books and a few hanks of Lasso :-D I reckon I'm overdue a yarn-buying spree :-) Will look out for your ebay listings too.

Noror haven't found any knots yet thank goodness. Ebay listings stopping my knitting as some stamps were damaged by cats so had to try and stop listings. Not able as so late so had to keep cancelling bids til close, bog eyed now

Amber,
I notice you joined the Womens Artistic Soul list, join in the conversation if you like.
Deb

Love these scarves, Amber! Persevere with those knots...