Cancer has spread:(
There is more in the previous areas and it has spread to other areas of the back.
Options were:-
1/ drug trial,constant monitoring then chemo as last treatment available
2/ chemo then nothing else but palliative care
3/ An older hormone with side effects that included thick blood and possible leg clots
or 4/ do nothing and not be monitored.
Mr Mog has decided to go with the drug trials as best possible option for now and how he feels. With that he is monitored all the time and if there are any severe side effects he can can come off it at any time. They wanted him to come next Tuesday to sign forms and for all tests but I put my foot down and said no as we had booked to go and see friends and a visit to Glastonbury.
So he goes the following Tuesday to start the thing off. Apparently that will be most of the day with blood tests, X-rays, heart monitoring, more CT scans etc then form reading/signing. He said he would go on his own but that is just not going to happen.
Firstly I want to read the forms as well- two heads better than one, secondly its a long day if he has to wait around in between stuff.
Our oncologist agreed to the delay and said we should lead our usual (??) lives as much as we wanted. The drug trial will work round us so we can still do our own thing and go to Wonderwool etc.
So shellshocked but realistically I knew it wouldn’t be better.
As Mr Mog said” I aten’tdead” its just something to cope with.
PMA as Blue Witch reminded me has a lot to do with things and we have lots of PMA chez Moggie even if it is buried deep sometimes.
This past week has been one of the worst weeks of my life, waiting is so hard and especially waiting for news on cancer.

Of course when you have something major to worry about other things are added aren't they? Had news from an aunt about one of my siblings. As some of you know I don't really have anything to do with most of my family, long story and not worth going into here. Hearing about a member of the family brought major crap to the front of my head, then my favourite cousin who is more of a sister than cousin had health problems and at one point I wasn't sure I could deal with everything my head felt so busy and so stressed.
Morning pages and a very understanding husband helped.

On a completely bizarre change of subject;-

we went into Sainsburys for a late breakfast after the hospital and they had a display in the front of the store for Mothers Day. All well and good and the usual flowers, chocolates etc. No surprises there but also on the display table a lacy bra and knickers in black? Would you buy your mother sexy undies? No neither would I:)I did ask Mr Mog if he wanted to get some for his mother but he declined. Mind you I think they may have raised a few smiles at the care home as she is 93 this year:)
at March 16, 2012 12 comments:

Sometimes you need a wake up call, something to tell you that yes the wheel has turned and warmer lighter days are upon us. 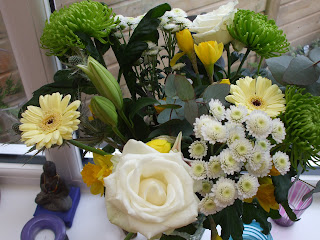 It needn't be a big wake up call, something as simple as a bunch or two of flowers from friends. The colours of Spring in a vase. We had visitors yesterday and it was wonderful. Like minded friends who came for lunch and made the day that little brighter both with their presence and their presents. 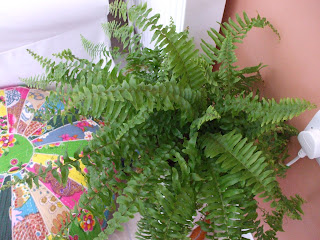 It made me aware how very little is needed to lift the spirits, to know someone cares. It needn't even be flowers, a word , phone call is enough. 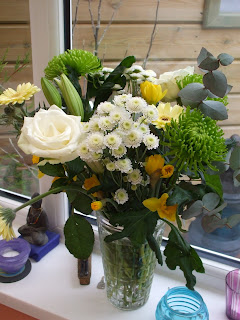 It has been a stressful few days. Mr Mog had a CT scan cancelled as the machine broke down. He got a new appointment for last Friday. Now why is it that waiting rooms have to remain in the archaic dismal past? The room we waited in was tiny, very hot, no windows and full. This is not just a normal appointment with a doctor, this is people with major health problems waiting for scans to give them results. Scans where they have to wait around. Drink a drink over the space of an hour before the actual scan. Sitting in a dismal room. One that was oppressively hot. I asked the receptionist if we could leave the door open but was told no due to fire regulations. What? How does getting fresh air in a room contravene that when the room is full? 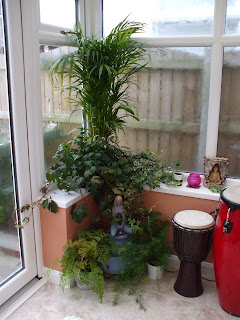 Add in people coughing and bugs just sit around all day. Plus when we were leaving after the scan there was a big notice at reception telling people not to come in if they had had sickness and diarrhoea in the past 3 days due to there being breakouts of the same on the wards.

Do they not think that perhaps some fresh air through the hospital may have helped a tad? I do. Anyway the scan went well, Mr Mog was fine with the drinking and the subsequent injection before the scan. We now just have to wait until Friday for the results of it all when we go to see the Oncologist. 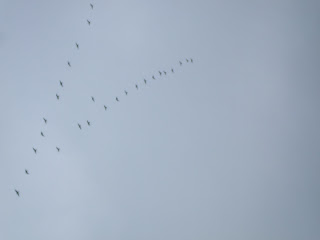 I came home with a headache and kept it until today but never mind I would not have dreamt of sending him on his own. We are hoping to go to Glastonbury after we get the results,as we haven't been for a while now. We intend to drop in on friends for an overnight stay. Not just to see their new kittens;) 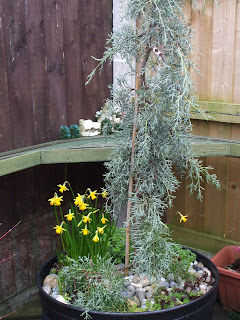 Everything is growing in the garden and conservatory. Flowers cropping up all over. I love the pink Pulmonaria and somewhere we have the white form. 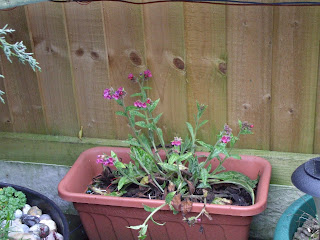 So many flowers brightening up the garden and our spirits. 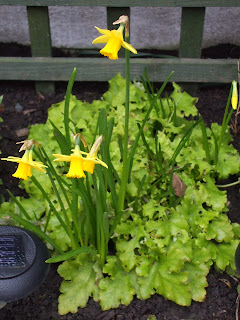 I love the faded splendour of these tulips. 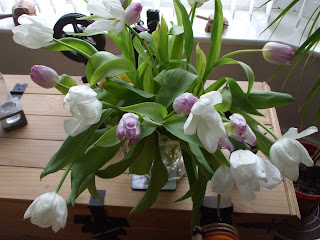 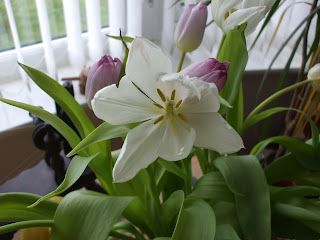 These are coffee plants. I bought a tiny pot and found that it had many plants in it so split them up and they have taken nicely. 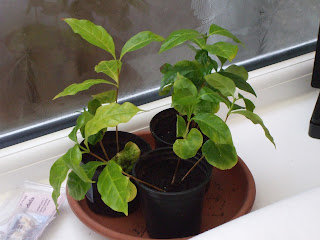 I have also got some lemon plants growing from pips which is fun. The first shoots are showing and they have only been in a week now so I have high hopes for them.
at March 11, 2012 8 comments:

I realised that my spinning and knitting don't mesh. I love spinning and I love knitting, but I don't spin to knit. The two seem like separate entities. I do knit some of my spun yarn but the act of spinning is complete within itself for me.

I don't consciously think of a project I want to make then spin the yarn for it. I can't seem to work that way. I like to spin bright colours, it lifts my spirits seeing the bright colour going onto the wheel. However the spun yarn up to now hasn't necessarily been right for the items I want to knit.
Take shawls for instance.

Most shawls benefit from being knit in a solid or semi solid colour way. Too much variegation in the yarn and you can lose the pattern.
But I don't necessarily like spinning all one colour or a semi.
One solution has been to add bands of variegated colour into shawls.
I don't want to limit my spinning to solid colour ways, it would take away the whole meditative practise for me.
at March 03, 2012 4 comments:

How did it get to be March already? Seems no time since Yule and now Spring Equinox is just around the corner. We haven't been doing much chez Moggies but in a good way not a bad. In some ways we are biding time waiting for the oncology appointment before we get on with the next stage of having fun. Mr Mog was supposed to have his CT scan yesterday to go with the other scan last week. Sadly the hospital rang early in the day to say it had been cancelled. The machine was broken and was expected to be out of commission until at least Tuesday. I rang them later on to confirm they had our mobile number for when they arrange a new appointment, this will hopefully avoid us sitting in waiting for the telephone to ring.
While on the phone I mentioned that all results were needed for the 16th for the Oncology appointment, they didn't know this so it was a good thing I rang otherwise the appointment could have been a waste of time if no full results.
We have had the talk about the appointment and what Mr Mog wants to do regarding treatment even if he doesn't take up the offer of the drug trial.
Obviously it isn't my body so my input can only be minimal. It is Mr Mog's decision to make. We don't avoid the discussion of cancer and treatments neither do we keep talking about it. I feel it is important to view it as just a part of our life and if we have our way then it is a very small part.
But, this appointment will spell out what options there are.
Mr Mog has decided that he doesn't want any treatment, thank you very much ,while he is feeling relatively well and pain free.
Should that change then of course he would consider going down the chemo route.
But as he pointed out it doesn't  guarantee to prolong your life it is all maybes and he feels that maybes with a side order of ailments isn't good enough. He wants a good death after a good life.
And you know what?
I agree, I want to keep my darling husband as is for as long as I can. and yes it is selfish:)
at March 03, 2012 5 comments: