winter haiku(and I know I have blogged today) 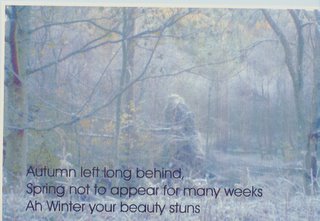 Yes I know what I wrote about once a day internet but I just finished postcards for a Winter haiku swap I'm in so I wanted to upload it. The photo is from Castle Howe in the English Lakes. I took it on my phone in November when we had heavy frost that looked almost like snow. Castle Howe is where the last officially recorded sighting of fairies was according to the book by Janet and Colin bord. A magical, beautiful spooky place. Hope you like it
at January 04, 2006