How the femmes began, a story - with sunsets

Further down this blog post I've added the story that intruduced the femmes to me, I do hope you like it.
First though I thought you would like to see some sky pictures.
Last night we had some beautiful colours in the sky as the sun set. There was lots of cloud but that added to the mystery and effects. 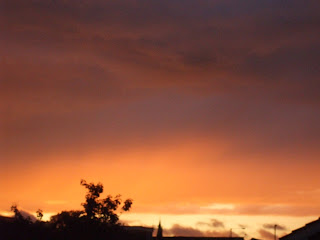 Doesn't nature give us outstanding colours to fill our hearts? 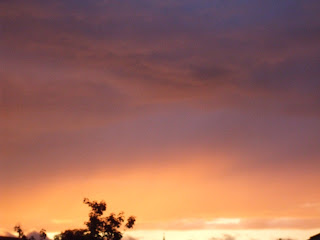 Who could ever imagine as clearly as this? 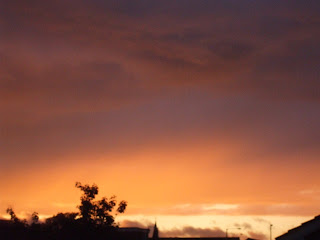 Seeing this inspired me to delve in my journal and give you the story I wrote where the femmes were introduced to me. 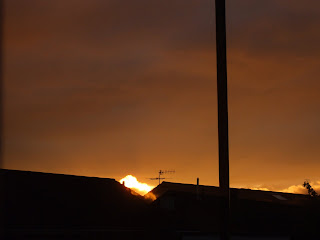 They weren't anything like their present form though, they seem to be always evolving 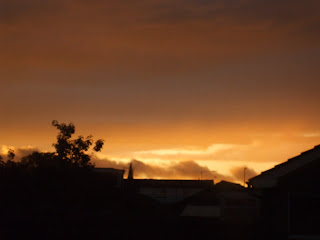 As the sky did last night. 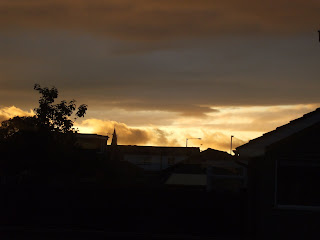 The femmes came about one rainy day at the beginning of Autumn many moons ago.
As I sat in my craft room idly thumbing through a magazine I saw a call for submissions. It could be written, stitched, stamped or what ever medium you worked best in.

At this stage I had never made any kind of doll.

I started to write a story, the one that follows this and as I wrote the words down they took on their own magic.
I shouted through to Mr Mog to ask how I'd make a simple doll. We experimented and the first femme was born. She didn't look like the ones I make now, but she wouldn't as I've moved outwards and onwards with my creativity. She had a tiny paintbrush and at the time she was just an idea to illustrate my story, nothing more.
The muse was watching me that day and decided to play a bigger part in things than normal. I loved the story writing but the doll entranced me. I wanted to make more.
I still used stamps and did paper art most of the time but kept being drawn to fabric and yarn. I took it further and developed elemental figures and couldn't stop.
This is the story that started things. 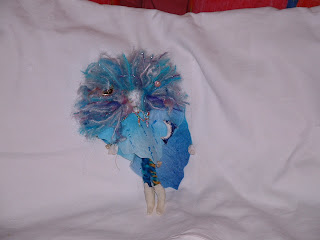 She gained a lot that night, gave of her soul and heart but at the time it seemed fair payment. In days and nights yet to come she would question how much it cost her, but that was in the future.

It started out as an ordinary evening, rain swept across the window making it hard to see the trees and hills that she looked for each day. No chance of deer coming tonight then.
As she sat at her desk ,all the inks, paper and stamps awaiting the call, inspiration was definitely lacking. She knew what she wanted to create - ART- she knew how to create it, but the spark wasn't there.
She did create and friends loved her cards, they must do because they said so. But she wanted more. The magazines drew her attention again, THAT was what she wanted to do; create a work of art. A collage so beautiful that people couldn't stop looking at it. In desperation she threw the magazines on the floor.
"I wish I had that spark of art, that passion for paper pens and ink, that fire of creation."
She strode up and down the room, filled with longing to be able to sit at the desk and just pour out all the feelings and ideas in her head onto paper and card. All this stuff she had to have, latest products that said "Buy Me". What a waste of money.
Again she cried, "I do wish I had that force, that drive, the heart for crafts".
A third time her despair rang out.
As it did there was a crack of thunder, a flash of lightning and before her stood a strange creature. Neither male nor female but both, covered in flowing pieces of material like rags or ribbons, but all colours changing as she watched. Glitter fell softly to the floor as he spun around, his face sparkled with traces of it. His hair was full of bits of yarn, velvet , charms and beads. He carried a paintbrush in his hand. 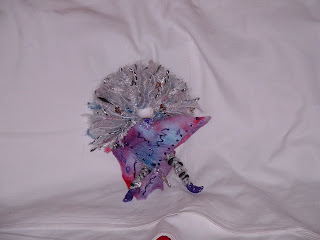 "Come on, come on, we don't have much time " he told her. "You have until midnight then I am off to my next assignment."
He swept everything off her desk, threw a new piece of paper across it and sat her down.
"What do I do?"
"You play" he said, "you take one stamp, one pen, 1 pad and you play".
"But how, what?"
He said "now listen very carefully to me, in art there are no rules, no right or wrong. There is only the artist and his heart. What he feels he needs to express and putting that expression into form is Art. His art and no one else's. Now feel, express and most of all enjoy".
She felt a great release, no pressure to do what she thought was art. Ideas flowed from her.
On to the paper by pen came feelings, dreams and poetry. So that was journalling?
She understood now.
On to card with stamps and ink.
Not enough?
She flew to her saved scraps of papers and leaves. She had to make the paper before it would all come together and be truly hers. Such paper she formed, delicate as cobwebs in dew yet sturdy with herbs and grass. It was coloured with dyes from garden plants.
She barely had time to sleep, the ideas were even bubbling up within her dreams.
One morning she paused, a cup of coffee halfway to her lips, what day was it? what month?

Where was her strange visitor? He was long gone if he ever really had been there. She itched to get back to her desk. There were so many ideas, so much time wasted in self doubt but no more.

Would it always be like this? A breath of air whispered " Yes you are an artist, you have to create. It is what you wanted after all".
And it was 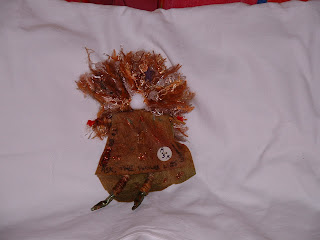 I love hearing this kind of back story about How Thngs Came To Be; thank you for writing it down to share.