A jacket, for me?How kind . What next?

There is finished knitting chez Moggie.
What is more it is for me this time.
I haven't knit jackets or sweaters for many a year. I became obsessed with shawls and then latterly socks and there just wasn't time for anything else.
That has now officially changed thanks to the efforts of an ursine friend of mine.
This friend of mine was wearing a jacket when she came visiting and I liked it. You would think that was the end of it? Not so. Said ursine friend showed me the pattern, told me it was easy. Whispered blandishments in my ear, "it won't take long, there isn't much pattern, , it is knit sideways so 1 main piece then just 2 little sleeves, it will soon be finished"
Oh what a tangled web she wove. Made worse when we found out that the self same yarn was on sale at Kemps for just 79p per ball instead of £2.95. Meant to be I think.
I tentatively cast on and started to knit. This wasn't half bad and grew speedily as the yarn is aran weight.
There were one or two minor drawbacks when I went wrong with the double moss stitch and had to frog a few rows but I soldiered on.
Very soon it was ready for pinning together 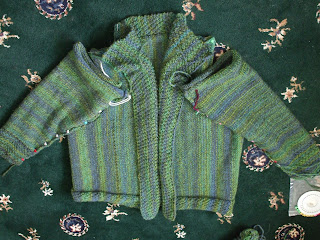 Then stitching the sleeves in. 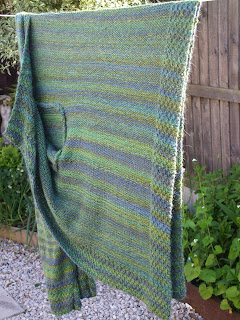 After blocking it went over the line to finish off the drying. 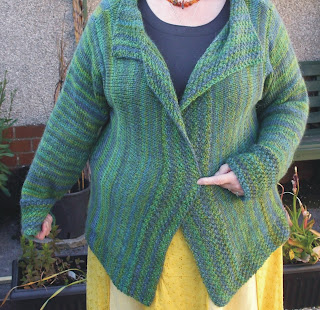 Tried on, mumm ok, will grow as it is worn. 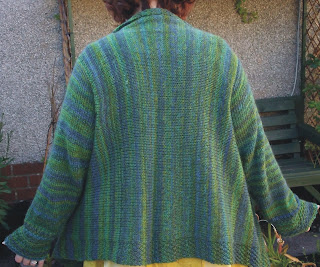 Over all verdict? Not too bad.
However said friend had something else up her sleeve, if you will excuse the pun.
Now you have finished that how about trying Elsewhere?by Amy Swenson. The link is a ravelry one so not sure if it can be seen. It can be seen made up by that self same ursine person on her blog though:) Scroll down and you will see the finished jacket and also what finally tempted me down the jacket path once more.
Yes said Bear dyed some yarn for hers and kindly offered to dye some yarn for me to match my new boots. We are bartering skills for this. 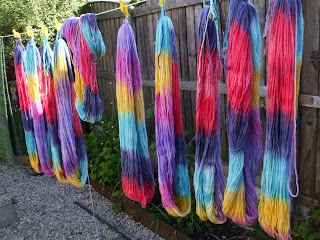 Now i'm leading you down the jacket making path :0)))

This looks WONDERFUL! Very nicely done, and the new yarn is gorgeous. :o)

I LOVE that jacket! You're so clever...sigh.

I love the colourway on your finished jacket, and the hand-dyed is going to be beautiful too! It will be lovely to have the something heathery and something bold.

G O R G E O U S! And that dyed wool is going to go so well with your new boots! Can't wait to see it finished!

Nice jacket, Amber! and I'm sure you'll love Elsewhere (I did!).

I can't believe that photo of the yarn to match your boots! Fantastic.