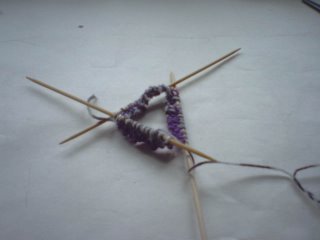 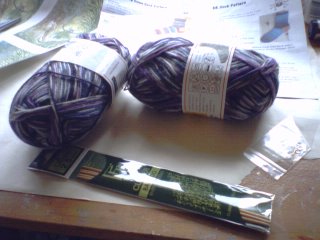 Well here we are at last, socks on needles. Not sure how long for as it is very awkward knitting with several needles. And to think some people do this for pleasure??? This was my order from Web of Wool, gorgeous colours and really spooky. We had our Imbolc celebration Friday and at the end we all took a talisman home. Mine was lunar and the slip of paper attached gave various details of lunar talismans one of which was the colours associated Purple and Blue. I had asked Web of Wool to surpirse me with colour a few days ago so coincidence or no? DH talisman was Jupiter and the colours associated were same as mine but opposite so where purple was my positive blue negative his were reversed. Least I think that was way and without looking for paper it will have to do. So back to the socks. I've cast on naturally as you can tell, I've done 2 rounds and it is so so fiddly. Pins are too fine for me as much as anything. My health stuff means I can't feel the pins as I should in my hands they are too fine. That won't be a worry next time I'll knit with bigger pins thicker wool. I'm not giving up yet. Other thing though is the darned things keep getting in the way while I'm working on one lot. Why do they do that and why do I care? Well I am determined to knit socks just to know I can still do it. I learnt as a very young child to do them and was quite happy making socks, but hey folks that was over 45 years ago and since then just bootees for my children and baby socks, this again over 30+ years so not exactly in the back of my mind waiting to be called on. On a more positive note me and Morse did more of the crochet throw for my sofa last night. Well Morse entertained me while I crocheted. This was more like as I can fly through the crochet without watching and it does help a girl to feel less inadequate after sock hell. Today more done on the cakes after a very late start for me. I've been fighting off a rotten throat infection for nearly a week now and it isn't going. I'll be doctors tomorrow if it isn't gone. I can barely speak(DH says not a bad thing that) and swallowing is a nightmare. So late start and now I think back to the socks, what do you say???
at February 05, 2006

Stick with it Amber as it will get easier as you go along. I knit my socks on 4 Needles!! And i love it.
I have to post in your Blog with my oldblogger account because just like Hazlenutcluster you got yours set for Bloggers to post only.
But stick with the Sock knitting and i look forward to seeing the finished ones.

thanks Silvia have set it for anyone to post now, didn't realise you could:) learning all the time:))

Stick with it - you just need to get past the first 7 or 8 rounds, the knitting will then behave itself a bit better and not twist around on the needles as you're finding now - I hate the first rounds on all the socks I've done, it feels really fiddly but once past this, you'll find your own style and stride and away you go!
I have high hopes for this pair of socks and look forward to seeing the progress !

I find metal DPN's much easier to feel and use than bamboos, the bamboos are too light and insubstantial for me (that's pretty heretical in kntting circles I know!)Don't forget to move one stitch each round to the next needle - it avoids ladders at the joins!

I will second that Stick with it... I knit my socks on 2 circs... or use 5 dpns.. for to hold the yarn and one to knit it... it seems to work better for me that way... Let me know if you want the website for directions for socks on 2 circs. There is so much pretty sock yarn out there you can't help but want to knit them!

They have all said & they are right - I'm on my first sock and almost did not get past row 3!! Once you have a few rows done and you see how the yarn pattern comes out you will be hooked. The heel & toe are easy compared to starting off!

Hi Amber, thought I'd pop over with the bag pattern. As you can see mine is slightly different, lol.
http://www.blacksheepbags.com/booga_bag.html Mine shrunk too much, so be careful when felting not to overdo it.

Good luck with the socks. I find it hard because of the eyesight issue (getting long-sighted now)

Sorry to be so late to comment but I do have some computer problems. Anyway knitting socks will get easier. The first time I tried it with 2.5mm needles I thought I will never ever finish a pair, but now depending on the yarn they pretty much fly off the needles ;-) So definately give it another try ;-)

Stick with it indeed, Amber, it will get easier. I knit aran or slightly chunkier socks on 3.5mm-4mm dpn's, and yes I love working with so many sticks!

That is definitely weird about how the colours worked out! x

Keep with the socks, Amber, knitting them will get under your skin soon - I'm sure of it. Loved to hear the serendipity about the yarn colour - it is a gorgeous shade.