bags done and in progress 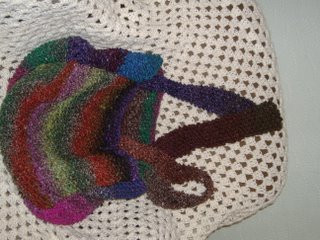 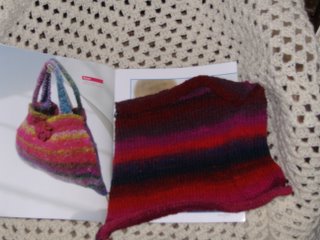 first is bag from Noro Knits book, I think its a little too baggy so this may be the time to do my first felted bag:) I'm pleased with the Kureyon, it does knit well and I love the colours in this particular one. Second is first half of bag from another Noro book, this one I am thinking of customising with gemstones hanging from the top edge. I've also been to a SnB last night where one of the girls helped me with casting on and starting knitting my sock. I think(fingers crossed) I may have the hang of it now. It was mainly knowing how to hold the darn needles. I haven't any ladders this time either. One thing I did notice, and I'm not going to pull sock back because of it, I can't keep to rib, it turns to moss stitch for some reason on part of the band. Seems like 1 needles worth has gone moss stitch. But as I said it doesn't matter, this is a learning curve and I will wear them:) I've just been going through my needles to see what I had as they were in a mess. I've way more of some than I'll ever use so have put them on ebay. I'm still looking for circulars in several sizes elsewise a good mix of sizes now. I also need to find me some good stitch markers, I've lost the new ones from the knitting magazine- can't find them anywhere. The girl who helped with the sock lent me a stitch marker as I hadn't thought to take any with me, not that I could as they have gone walkabout. the bobble said he'd make me some if I get some jump rings, after all the gemstone and crystal stash is still exceeding large so why not use some? I got some nifty knitter frames in the mail that I'd ordered from ebay. Thought they may be fin to play with. Thing was they were 3 times the size I thought so quite a shock when I opened the parcel. Not bad for $5 though:)
at February 24, 2006

Just got my first Noro book.....Oh Boy this could be sooo expensive but I will deffinetly make the bag but will have to felt it. I just feel the need to felt when I make bags!

OOOOOOOOhh a gemstone and crystal stash ..sounds gorgeous .I got a Julia MacDonald handbag in the sales with gemstones Mum says it looks like Elizabeth 1st's bodice.Ist thing a gemstone falls off ..took us ages to find some on E:Bay to fit and glue it back .Mum loves your bags too..I love "Kemp" ..must get some "Blossom". Holly

The bags look great, look forward to seeing the first one felted too :-)