It is official, the full moon helps spinning. Don't believe me? Wait until you scroll down. 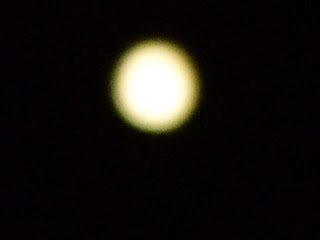 This was the most fabulous full moon the other night. 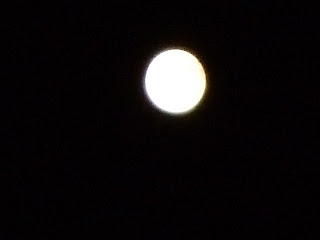 Doesn't she look luscious? It seems to have been an odd moon phase this to say the least. I know I am not alone in thinking this many of my friends have had the same month. It was a case of "phew" when she reached full.
Lots of different stuff, mainly health I'm afraid although the rotten rat who stole from my debit card didn't help. And BW I don't have a credit card, I'm one of the strange people who doesn't. I prefer to use my debit card or paypal. Or did until now.

But as I said in the title I've been spinning. I had a lot of problems this time as my hands are playing up. Quite often I can't feel the fibre so it doesn't draft at all smoothly. It is either stuck in my hands or running too freely because I can't grip.
I haven't given up as you can see:- 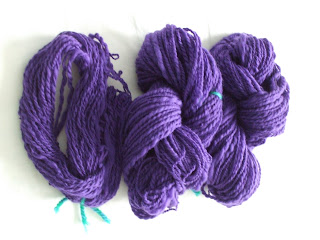 This was merino given to me by Laal Bear. Now merino isn't a good fibre to spin as a beginner apparently. That probably didn't help. 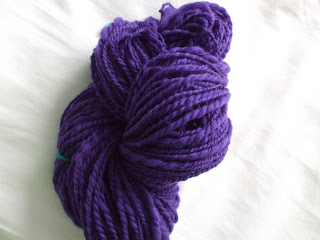 Doesn't look bad does it? I'm thinking of making a moebius cowl with it as it is very soft.
at October 06, 2009

And it's a beautiful colour too!

How strange that everyone seems to be having a time of it this past month!

BUT, I had to say that your spinning does not look like a beginner skein at all. It is beautiful! Colour, texture, everything :)

Yes - full moon did a weirding on me too. But it did the trick there for your spinning - the colour! It's such a lovely wisteria kind of colour - perhaps a little deeper. So pretty.

Oh and I am one of those odd people who only has a debit card and paypal. All the convenience of a cc but it's your own money...makes sense to me. Oh and bums about the ratbag who stole your dosh. May it bring them only boils and pox.

Yes, the moon was spectacular this passing...for all the mischief She caused, She certainly made up for it in brilliance....

Looks brilliant to me!

I'd recommend a cashback credit card - use it for purchases for the online and consumer credit act purchase protection and pay off every month. MSE will tell you the current best.