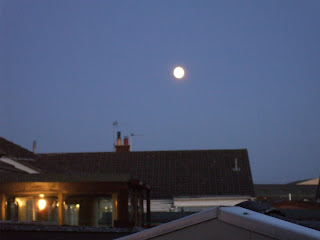 Yesterday was a great day for colours and the moon We haven't had such a gorgeous sunset and sky for what seems like weeks now. First off all the moon came out on view and she was closely followed by the sunset. Bear in mind these were just taken from the garden in the middle of an estate. It had crossed my mind to go down to the beach with Mr Mog but as I'd had a bad day I decided not to. 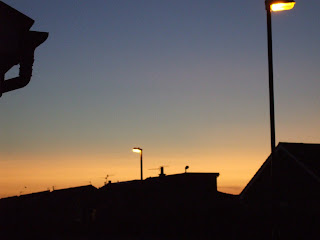 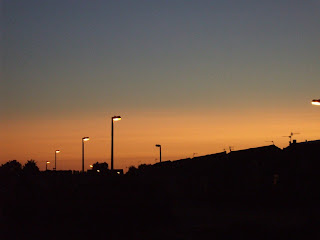 I love the mix of electric lights and sunset here. 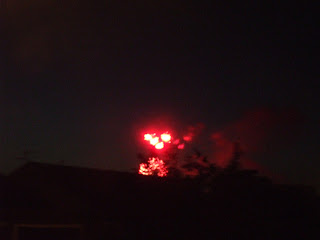 Then as part of the towns seaside festival there were fireworks and once again pictures are from the front of the house over roofs. I think Mr Mog did well to get them as clear as he did. 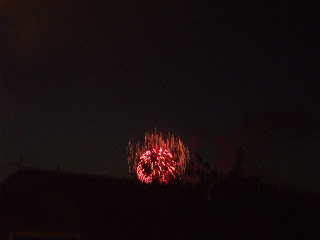 They certainly brightened the night sky.
As I'm writing this there is the sound of old planes going over. All part of the seaside weekend. Mr Mog said he thinks we've had spitfires and a wellington. I saw planes:) Not well up on types but the sound was glorious yet frightening. Glorious for the sound old engines make,frightening because from a very young age I've dreamt of planes and air raids. All that even though I wasn't born until the early 50s. Race memories or previous life? All I know is that old planes trigger something.
I sometimes walk a fine line between sanity and despair when memories come back. Guess we all do to some extent.
Answering comments and emails, yes I have a copy of the White Goddess, it is very battered and the cover is off it but I've read it and consulted it many times since my nan gave it me in 1962, this edition was published(according to its roman numerals) in 1961. Just looking at it now it opened at the battle of the trees and I'm reminded of the song of the same name by Rush which I love:) I'm still thinking over the film Zeitgeist and what my feelings are, what I believe. It has made me reassess and that is good. I think sometimes it is easy to sink into complacency and live life by auto pilot. For me getting out of auto pilot and enjoying each day for what it is, is important. I don't always succeed but I try. I realised I had lost some of my mindfulness and awareness with the stuff that has been going on, both for me and for Mr Mog. I woke this morning with joy and a silly head on me so I've been making the most of it. We had a look at the car boot, first time in months. I found a jam pan for £1, perfect for dyeing in.

I finished the orange Irn Bru socks last night and here you see them sunning themselves amongst the daisies. 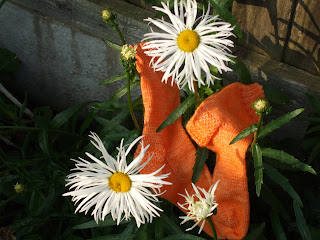 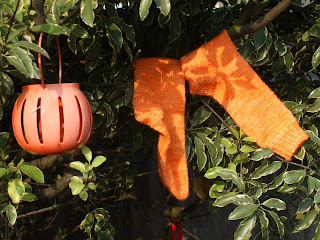 Then they hung around in the tree with the pumpkin but it is too early for Samhain. 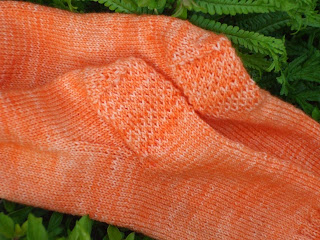 Close up of the eye of peacock heels:) I really enjoyed using a solid colour for a change. In fact it inspired me so I decided to dye the next 3 months suggested colours.
Browns for October
Gold/yellow for November
Red for December.
Oh and as I am still much taken with variegated I did a skein with vivid violet, cerulean blue and turquoise. Just because I could:)) That is my favourite up to now, however once skeined or wound into a ball and knit I may just change my mind:) 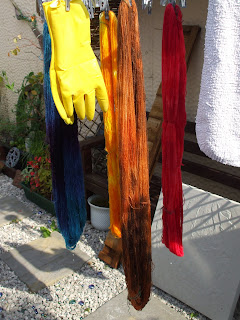 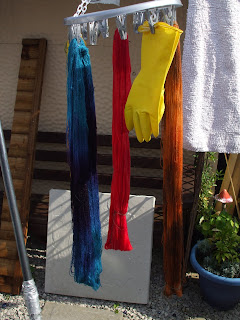 Yellow is hidden a little, but notice the jazzy gloves? Didn't want to dye my hands. We also made another batch of fizz bombs for the bath . The house smells delightful because I decided to use patchouli oi to perfume them.
Oh and Mr Mog re hennaed my hair yesterday so I'm amber once more:)
Phew think we are up to date:)
Oops no, I've started a sock in the Noro sock yarn and so far, so good. I love the colours, murky mud going into purples on the cuff. But there are promises of brighter showing further into the skein so watch this space.
at September 14, 2008

It's so funny I had been caught up in the color red this week, and now my mind turns to orange (inspired by your socks and a photo I took of some orange soda). So off to look for some Orange yarn, I think dish cloths are in order. By the way keeping your awareness and living in the present moment are the key to experiencing joy and enables me to handle crisis calmly. Things don't seem so desperate.

Great post Amber :) I guess we all need to re-assess at times and after the year you both have had I think its totally natural. You voice feelings I am sure a lot of us have; take heart dear friend and I am so glad that I know you good folks & I am sure you will both bounce back to better days:)
Socks look gorgeous and I have to say I am enjoying kniting a solid(ish) colour too as it shows pattern so well . Mind I have only just turned the heel on the first one !!
We have had a brilliant moon here too and lets hope its fine when you come over for more sunsets

Now you have been bitten by the dyeing bug Mr Mog had better hang onto his T shirts and unmentionables or they will be in the dyepot with the wool!
I have woken up feeling a bit better today so maybe it is something in the air.
I think Jean's idea of orange dishcloths is a great one. I have some bits and bobs of cotton in my stash so I can see multi coloured dishcloths on the horizon. If I have to wash dishes then why not do it in style?

What a lovely cheery pile of colours you have Amber! I have orange running riot in my mind too and I'm always like this at this time of the year with Autumn calling to me I expect! Lovely socks as always - have decided seeing as it's taken me so lone to find the sock yarn for you that there will be a bundle for Mum to give you on the 27th!

Such great socks! The color reminds me of orange sherbet!