Socks for hospice update and other stuff 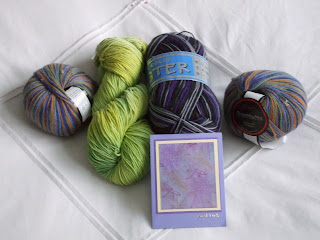 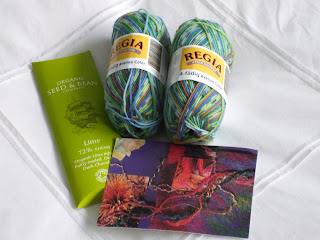 Look at these fabulous pictures:) My first yarn donations arrived already:)
The top picture shows the goodies from Debbie (Sussex Yorkie)
Spring for sure on 1 set Debbie and possibly winter for the others?Thanks also to Debbie for the beautiful good luck card.
Secondly the package from Rosie
Not only yummy yarn but also chocolate with her card:) Mr Mog recommends the chocolate:)
Thank you very much, these have gone in the special hospice yarn drawer to await knitting.
I haven't put any pics of my Lisa Souza monkey sock up because there isn't a monkey sock. Sadly monkey and I didn't agree so we parted ways and I'm working down the foot on a simple sock. I'm thinking that I'll do the socks in the pattern I'm used to for now. I'll practice other patterns on something that isn't part of this lunar year and if it works out, then I'll progress to different patterns. Sound ok to you? Not chickening out honest:)
The other thing I found out from trying to knit monkey socks. Lisa Souza sock! merino didn't like my bamboo needles. I frogged several times:( I then cast on to the purple needles gifted by Yvonne and the yarn liked them muchly. I still had to frog the monkey again but still.
I've never had that problem before of bamboo and certain yarns not speaking to each other.
Next bit of news we got the appointment through today for Mr Mog's radiotherapy. He has to go this Wednesday for the CT scan to map out the exact area they will zap. They tattoo the marks on him:)) Indelible pen I presume, my moggy man has no tattoos and he isn't going to start now(VBG)
After that the radiotherapy starts 22nd January and he has to have 37 treatments. I foresee a lot of sock knitting don't you?
It put a bit of a downer on us this morning but we knew it had to come so this afternoon we went on the beach for a walk and it helped.
He is much more tired than he was and more prone to tears, this is the hormone injections and to be honest if I thought that would be the only drawbacks to the radiotherapy as well I'd be over the moon. Time will tell.
Hopefully I'll have a picture of the first finished sock for the lunar marathon tomorrow.
Lime and Violet did a piece on it on daily chum and I've had a couple of emails already offering to help. Mr Mog reckons I'll be doing nothing else but socks all year:)) Little does he know, I've a shawl in my head that I want to knit in Jo's fire mohair and that will be started soon.
at January 05, 2008

Good luck Mr Mog and courage to you both , angie ,Jeff and Holly xx

You've gone BIG, being on Lime N Violet now!! I saw that this morning and was excited for you!! Take care of yourselves!!

For RT, they do truly tattoo permanent marks. I do know people who have been able to promise to leave stickies marking the spots alone and to shower briefly, etc, in order to have temporary markers used. The other option is to have the tattoos lasered off when done...

My thoughts and prayers are with you and Mr. Mog. Please let me know if you need more sock yarn, or a shoulder to dump the load on.

Surely there is no need for the marks to be permanent - they can refer back to their ultrasound / x-ray images if they need to. FL just had marker pen.
Good luck with all those socks! Ideal size of project for waiting rooms!
Good luck Mr Mog!