Do you get the idea I'm going to be busy this year? 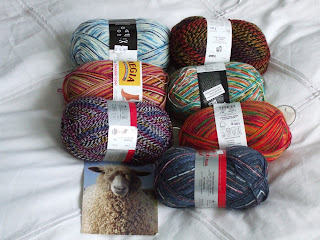 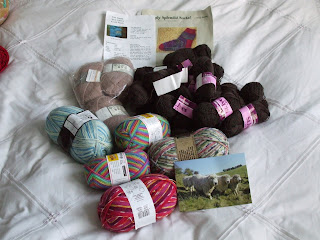 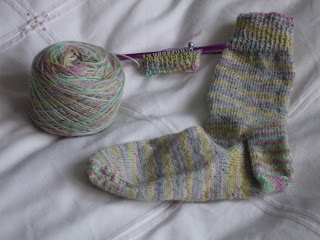 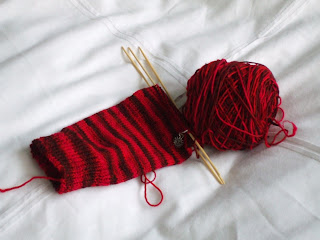 I think 2008 is going to be the year of the sock don't you?
Look what came in this morning's post. Hayley and Wye Sue thank you very much for the fabulous parcels:) I am going to have to teach Mr Mog to knit methinks(VBG) Some wonderful yarn here and it will be fun knitting it up. Mr Mog has just been in the garage and brought in a set of 4 plastic drawrs. He thinks the emptying of just one of my existing yarn drawrs was a little less than I will need:)
The other 2 pictures are progress so far. One finished sock and start of one in the Lisa Souza, and nearly ready for the heel on the Dennis the menace one. The two yarns are totally different to knit up. The red is more close knit. I suspect I could have gone down a size on the needles for the Lisa Souza but no matter. Don't the purple needles go well with the yarn?
at January 07, 2008

I found your blog through Celtic Memory Yarns a while back and have been lurking ever since. I was wondering if you would be interested in another sock yarn donation for your Hospice knitting. I was sorry to hear about what Mr Mog will be going through (and you for that matter). I've seen a lot of positive outcomes in my line of work, I'll be rooting for you!

LOL, are you sure you wont be knitting 5 pairs for each moon?!
I posted the Tiger yarn today so it should arrie sometime next week I guess. I am knitting some at the moment so you can see how they turn out. I have the sock bug too 4 pairs on the needles at te moment. I thought I would try Pomotamus but have done one row and reverted to plain vanilla socks again. It is quite comforting knitting something you know the pattern to of by heart.
Good Luck tomorrow - 37 sounds like a lot of treatments, so much patience needed. Hugs