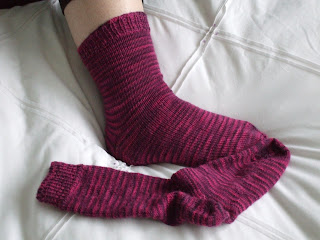 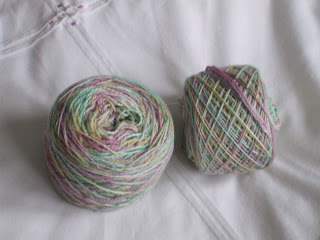 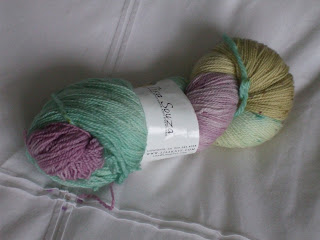 Hope everyone has a happy, healthy and very creative year. I saw the new year in by finishing a pair of socks. The yarn was a swap yarn and is from the yarn yard. Love the colour of them:)
I also started my first pair for the hospice year of socks. yarn is Lisa Souza Sock! merino I purchased from lime and violets destash sale. It arrived a couple of days ago and I love the colour:) A little like pistachios or sugared almonds isn't it? colour is spumoni. And as always I'm amazed at the difference when you wind it from skein to ball. I'm going to really enjoy knitting this up:) I'm trying monkey socks:) A big step after several pairs of simple ones isn't it?
I've had several kind folks offer yarn for the socks but still have vacancies on months as you can see(VBG)
If you would like to sponsor me by sending enough yarn for a pair of socks I'd be very grateful. They will all be going to the hospice same as the shawls did.
I am getting more and more nervous now about Mr mog's radiotherapy. They said it would be early January so could be any day now. I think it is the thought of the damage the radiotherapy can do with it being his prostate. I know they have to spell out the drawbacks but still I don't want Mr Mog having any more problems. I know I'm probably worrying needlessly but its the fear of the unknown isn't it?
We had a lovely quiet new year, watched a couple of episodes of Angel, glass of wine and sock knitting for me:) My brother phoned from New Zealand just before midnight and spent around an hour on the phone. He and my sister in law are coming over in September for a month which will be great. I haven't seen my brother for a few years and I haven't seen my SIL since they moved to New Zealand around 9 years ago.
And what about 2008? What kind of year will it be I wonder?
at January 01, 2008

Monkey socks! Wow my hat goes off to you (or it would if I was wearing one).

Hope you don't mind but I put in a plug for your sock year on the Etsy sellers group on Ravelry.