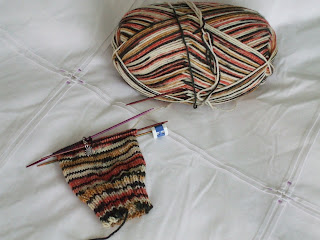 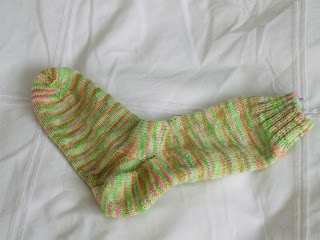 I finished the first sock for April, the Hare Moon colourway dyed by Perran especially for the hospice. Doesn't it look lovely? Very springlike.
I also started one of the tiger socks from the yarn donated by Maylin, this should have been earlier this year but if you remember I cast on the wrong yarn:) Anyways these definately look more tigerlike don't they? It is gorgeous today, blue blue skies and the mountains over the bay are white with snow. My daughter phoned from near Manchester airport and apparently it is covered with snow around there. Had a bit of a scare with her, she rang last night and had apparently had the ambulance at home for over an hour as she collapsed. They weren't sure what it was(really bad stomach pains) They did suspect acute pancreatitis but told her she could self monitor for 12 hours to see how she was. They were supposed to be going to a show and for a meal in Manchester to celebrate her partners birthday. This morning she was trying a cup of tea, she hadn't been able to keep anything down even water last night. The pain seems to have subsided so hopefully the worst is over.
I was going to take a picture of my hands,wrists to show you the colours:)) Despite wearing a double pair of gloves for the task in hand, they were useless. So imagine deep purples,magnetas blues and yellows. A pretty picture to be sure. And I hear you asking why the mog would be covered in colour? I'll show you in a couple of days when the mystery objects are ready. And no it isn't yarn:))
at April 06, 2008

I am so proud of the way it has come out. You and Perran make quite a team.

Love the Spring socks , my they are flying off the needles these socks of yours . So glad your daughter is okay , sounds like she hada rough time of it. We went for just a night away in the van (I sleep better in it !!) and we awoke to snow this morning . It looked lovely and thankfully it melted away in the sun otherwise we would have been stuck there :)