The Muse came visiting this week and for the first time in many a while she wanted to play with fabric. I was so pleased to see her as it has been a pretty dire month in oh so many ways.
Her first project was this:-
Titled When moonbeams reached the ocean they turned into pearls. 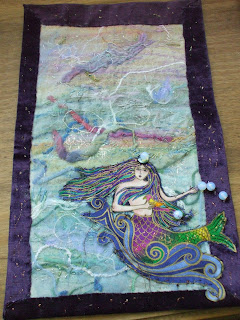 This has been languishing in a cupboard for a year I think since I last did anything on it. I dyed the fabric several years ago and did a combination of machine and hand stitching on it. The mermaid is a Laurel Burch print. I've added  moonstone beads for the pearls and touches of crystal glitter here and there. 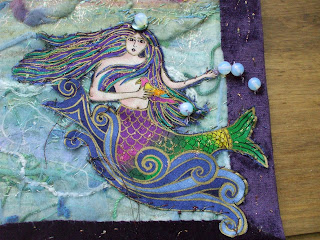 I really love working with fabric and had forgotten how much fun it can be.
This crown is made from a piece of knitting that I felted several years ago. It was Colinette point five I think. I cut the heart below out of it and the pieces left suggested they could be a crown. 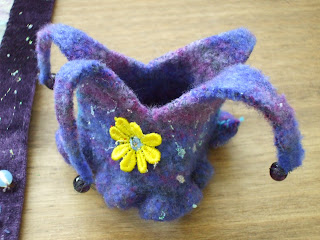 All it needed was a little tweaking and a crown it is.
Quite a few months ago I started on some more femmes and then it didn't seem the right time to finish them. The time is now as the saying goes and several femmes now have shoes. There will be pictures when the shoes are dry and painted. 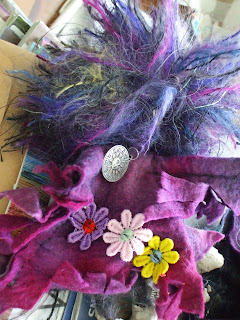 The heart is for a friend of mine, made from the same piece of felted knitting, stuffed with lavender collected from our garden last year. 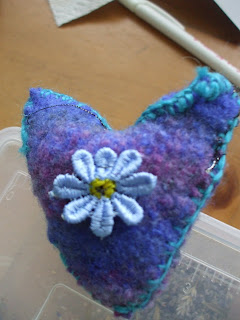 A blog post would not be complete unless knitting showed its face. This shawl is called Into the green, named after one of my favourite author's books.The yarn is Jawoll Magic, pattern Shaelyn. 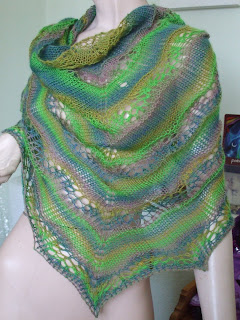 So what else is happening chez Moggies?
We have to go back to Oncologist in a couple of weeks and decide what treatment, there are 2 possible trials. One is unnamed treatment, 50% chance of placebos and we would not know what Mr M was on.
Second is chemo plus a n other drug and we would know. Think that is the more likely option. I don't personally think it right to give someone hope and only give them placebos.

Mr Mog looks really well and is enjoying long days playing in his new shed. You wouldn't think that his bones were riddled with cancer:( Long may this last.
at July 06, 2011

Lovely art in this post. Thank you for the update. Love and hugs to you both.

Good to read an update, And pleased things are going well.

Fabric and sheds are good ways of staying positive!

I too would pick the known option for treatment.

Love the felted pieces and and shawl Amber and I'm glad to hear that the Femmes are coming along too.

So much crafty loveliness! The Muse was worth waiting for!
And good to hear that Mr M is having fun in his shed :D