Brought to you by the colours yellow and green.

Today's post is brought to you by the colours yellow and green. Lots of both and lots of different shades of both. I woke up in a yellow mood:) 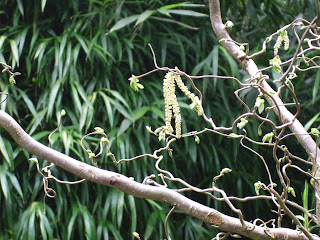 We will go from catkins to new leaves, via flowers. Won't that be fun?
As I said I woke up in a yellow mood. I had a bad night last night, I was frozen most of the night and feeling ropey. When I woke this morning and lay half drowsy I saw flowers and the idea of a floral cleansing.More shortly when you have had your fill of yellow and green. 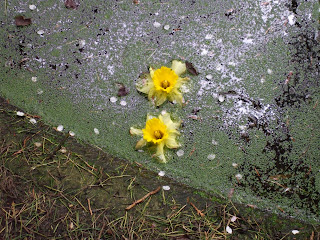 Don't these daffodils look gorgeous against the green of the pond? 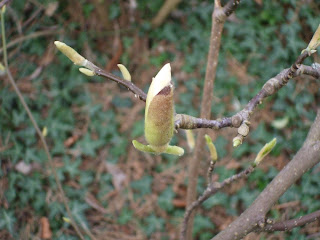 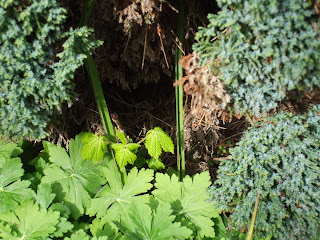 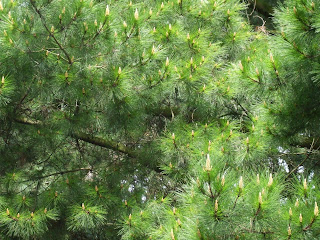 New yellow cones on green conifers. I love the way the light shines through the leaves. 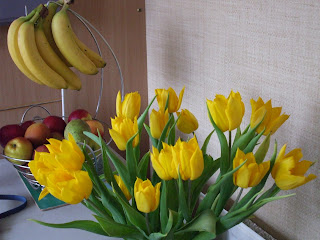 More tulips for the kitchen and bananas towards our daily smoothies. Yes we still have a smoothie each morning with as many different fruits as we can added to live yoghurt. 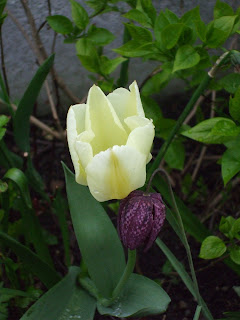 These tulips are in the garden and I love the contrast with the snakeheads. 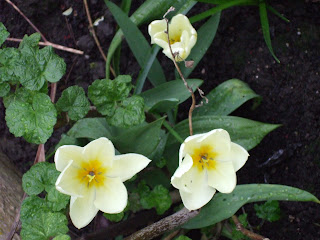 The water on the leaves and flowers gleamed as we took the pictures. 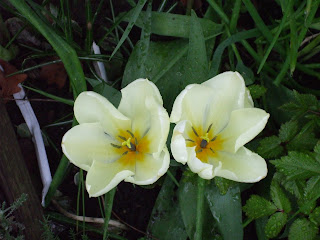 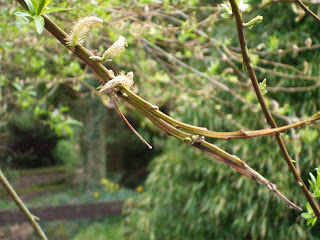 A mix of catkins and new leaves.

So back to the yellow flowers. I had the idea of cleansing my aura but virtually not with fresh flowers. For some reason the flowers suggested in my mind were forsythia, dandelion and primrose. I haven't worked out why these particular flowers yet so if you have any ideas do tell. I know the dandelion was because of the diuretic benefits i.e losing the negativity via this flower.
I saw the dandelion at my feet and in each hand were the forsythia and primrose. I saw them sweeping down each side of me and as they reached my feet they touched the dandelion petals. I did this 3 times and afterwards felt much clearer. I think the touching of the dandelion was for it to contain the negativity and as it's other name is " pee in the bed" I took it to mean that I'd remove the negativity via the loo:)
However you want to take it, I know it did me good on more than 1 level. Yes I still have the asthma and the discomfort but my mind feels better about it.
at April 09, 2009

Thanks for the lovely photos. the bright yellows, soft greens and pure white of the pond flora remind us that (even if we don't quite believe it), Spring is here!

Lovely pics! I especially love the picture of the bright yellow tulips - beautiful.

I don't know about the cleansing flower thing, but I have a very strong feeling that you need to find a good massage-person. I think it would do you the world of good right now to have two or three treatments.

beautiful pictures...makes me want to have Spring about me, (even though I am just revelling in our Autumn right now).

Your choice of plants for an aura cleansing is fascinating. On the primrose: I don't know what its energetic qualities are, but medicinally it's very good for the nervous system, (an infusion of the flowers as tea), and the whole plant is considered to be an expectorant.
Good ol' Culpepper said of it that it "is made as fine a salve to heal wound as any I know".

As someone who also gets asthma with chest infections and the like, I know how distressing it can be, so primrose working on the nervous system would feel right.
So, I imagine cleansing your aura with the assistance of primrose is quite possibly a very intuitive choice.