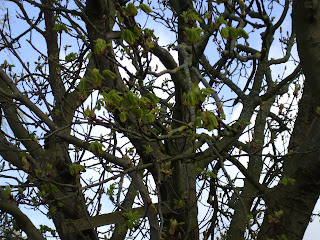 There are signs of growth everywhere now. All the trees are budding or in flower and the hedgerows are that special shade of spring green. It is a delight to see the buds bursting.
Today was our anniversary. A special day for Mr Mog and I. It doesn't seem 15 years since we married but apparently it is:) We didn't have anything planned we just thought we would go out somewhere. Health stuff stopped us doing too much but it was still a good day. We had a little mooch about and lunch at our favourite Italian restaurant. 4pm I had another doctors appointment as I'm nowhere near well despite the antibiotics. It would seem that my asthma thought it was time to reappear after quite a few years and I'm on an inhaler. I had to do the blow test to see how my lungs were doing, not very well it would appear hence the inhaler.
I look forward to an early recovery, what with this and the rash still being much in evidence on feet and hands it has been a depressing end to winter. I've become quite used to wearing gloves for knitting now:) 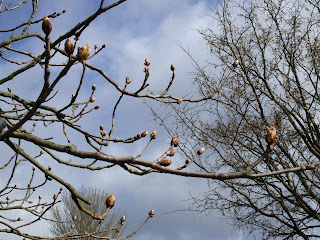 I've decided to have a go at making more creams and oils for my own use. Part fuelled by watching "Grow your own drugs" but mainly something I've always done and wanted to get back into. I've ordered some cocoa butter, coconut oil and beeswax and some jars and bottles as my supplies are much depleted. Watch this space.:) I've been asked quite often what the smell is that my femmes have. It is an old recipe from my gran using various essential oils and I love it. I'm thinking of possibly sending a tiny bottle out with new femmes, what do you think? 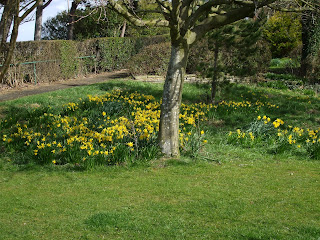 Now the winner of the rainbow under garments . I did a draw of the names and Rosie has won. Can you let me know your address again Rosie please?
Congratulations:)
at April 08, 2009

Happy Anniversary and I hope you get better soon. Your lotions and creams will help soothe away your ills and restore you to full health.

Happy Anniversary! May the next 15 years be just as sweet.

I love the smell of the femme that you sent me!

Oh, yes, yes, yes! Please include a little vial of that scent the next time you send out the femmes. It fades away all too quickly.

Happy anniversary! You're 20 days married older than us. I didn't know that!

Please tell me when you need things I have, like beeswax. Mine will be much better than the mass-extracted/overheated processed stuff you're getting... and I'd love to have sent you some.

Do hope you're soon feeling better. Having spent all week mordanting a couple of raw fleeces (seemingly billions of batches), I really do think you should stay away from dyeing chemicals until you are completely better - they're doing me no favours and I'm not asthmatic.

I'm doing the knitting with gloves on thang too. I can't quite get my speeds up with the cotton gloves on though . . .

As for the purr~fume, could you offer it to those of us who already have a femme? I'd love to buy some . . .

Happy Anniversary! And I hope you feel much better soon. *Passes hot soup-potion guaranteed to kick the nasties*.

And yes, your femme smells sublime. Everyone who looks at her is noticing that too. A lovely blend you've used there.