Look what we woke up to today:) The earth wears a white gown for Imbolc and it looks so pretty, especially now as the sun is shining and it is snowing again. We were supposed to be going to visit ArtisAnne but as she also has snow the trip is off. 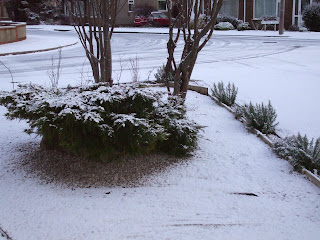 When it looks so pretty you can't help but smile can you? Especially as we don't have to go too far. We will be going up to the prom to see how the Lake District Hills have fared. I suspect they will have lots of snow if we have this much. Normally the seaside doesn't suffer. 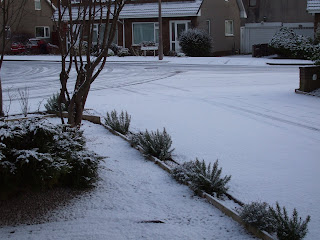 So a little colour to add to the monochromatic snow:) 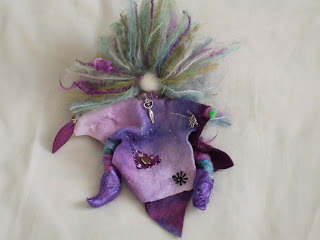 Here you see Belissanna,named in honour ofBelissama the Celtic Goddess of light and fire, crafts and incidentally Goddess of the River Mersey:) On her pocket she has the word dream signifying the connection between the spiritual and the physical planes. She also wears an aspect of the goddess on her together with a leaf. She is connected to the earth to ground her in her endeavours. 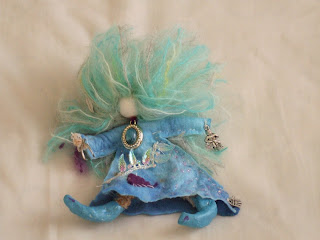 Birgitta, keeper of the flame. A water femme and dedicated to Brigid lady of the wells and bright waters. She carries a charm representing Aquarius the water carrier who is the zodiac sign for this time of the year. Also a wishbone for luck in any ventures. She has some purple streaks in her hair,a touch of the old wisdom which she brings forward into the new season. 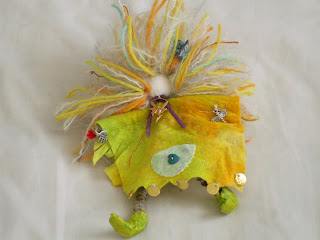 This next femme is dedicated to Airmed who was a Goddess of the Tuatha de Danaan of Ireland. She had great magical power and specialised in herbcraft, rather appropriate at this time of year with new growth daily. She is ready to dance around the new bulbs. The light golds and yellows in her hair represent the upcoming snowdrops and aconites. The fairy and dragonfly look forward to the brighter days now the wheel has turned once more. 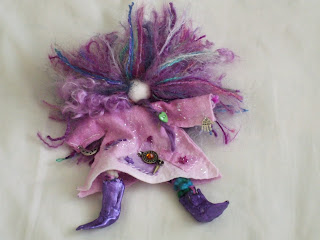 This femme is Iridicassia named in honour of her favourite flower the crocus. Who's Latin name is Iridicae. She carries the crescent moon for new beginnings. The amber pendant carries a representation of the goddess. 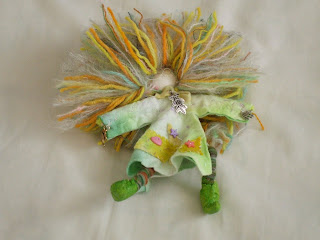 Flidhais, Goddess of the woods and trees. She wears a silver oak leaf, a sign of new growth. In her hand the Eye of Horus or Eye of the Moon to watch over her and keep her safe in all endeavours. 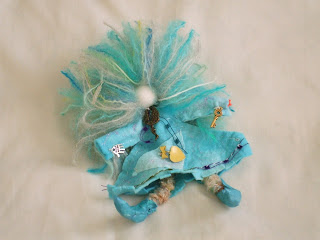 This femme is Blancheflor, the Celtic Lily maiden aspect of the triple Goddess, who's charm she wears around her neck. She carries a key to unlock new ventures. On her dress a heart which she shares willingly. 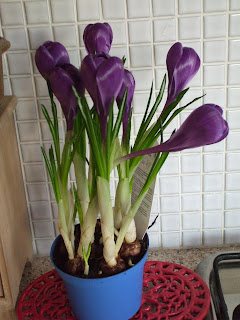 Here you see the crocus I showed the other day. We now have 7 flowers to honour the day. 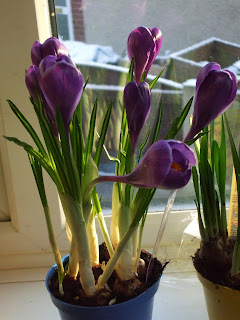 Well worth the 79p we paid, don't you think?
As always if any of the femmes call to you, message me. They are ready to go to their new homes.
at February 02, 2009

Your poems are beautiful, and I LOVE your goddesses. Love the term "femmes." That's so perfect.

Oh Amber moggie! I love your goddess-femmes!! they are sooo gorgeous! Birgitta, keeper of the flame, and Iridicassia, crocus-femme particularly appeal! You are very talented, and I shower blessings on Imbolc your way!

The Goddesses are wonderful!
Bellissanna and Iridicassia just call to me! -- both their colours and their ... intent? resonate with me these days.
I'm ready for a new beginning. But at the Imbolc Crossroads working we just did, wherein we drew runes to help us choose which path we should follow next -- I drew Isa.. Ice ..standstill. I'm still waiting to discover which direction to turn ... And trying to have patience, though it's hard to wait to ask Brigid's advice again.

Pha! You call that snow? What? we had about 8". lol. Was amazing. Soft Powdery....well what can I say. Then the damn council put salt all over it, turning it into a black slushy mess.

Well, just popping a comment on your blog to make yu smile. The Elementals are as usual ALL fantastic...I love em, I love em, I love em. And even more special that they all have little stories and personalities. You are amazing. Now I really MUST make a bed for Brighid next year....don't you think I did well making a cross? Last time I made one was out of Art Straws as a kid with my mother!

Oh such a lovely post - those femmes are just gorgeous! And the snow (Imbolc snow - wow!)...and the crocus and, and...how perfect!

Oh, your Femmes are just gorgeous. I love Iridicassia. She just leapt off the screen at me. Also your crocus' are lovely.

We still have a thick covering of snow up here and it froze again last night but down in Portmadoc ? nothing!! The roads are clear though and it did look wonderful yesterday in the sunshine.
All the femmes look amazing dressed up
I too bought a few pots of those crocus and daffs at you know were ;)

Love the pictures of the snow and the lovely crocuses. Your next package will be in the mail soon - hope you're having a wonderful week!

Amber Moggie,
Just read your note on my site and had to pay you a visit. Can only echo the comments above...the goddesses are delightful and a lovely way to honor the Ladye.