Happy Imbolc or Candlemas. May this turn of the wheel bring Brighid's creativity into your life.

For this day I am joining what will hopefully be many more bloggers putting a poem on their blog in honour of Imbolc and Brighid.I'm posting early as I may be away for a couple of days. We shall see what the weather brings.

WHY: To celebrate the Feast of Brigid, aka Groundhog Day

HOW: Select a poem you like - by a favourite poet or one of your own - to post February 2nd.

RSVP: If you plan to publish, feel free to leave a comment and link on this post. Last year when the call went out there was more poetry in cyberspace than I could keep track of. So, link to whoever you hear about this from and a mighty web of poetry will be spun. Reya and Deborah have sent this call out as they have for the previous 3 years.

Feel free to pass this invitation on to any and all bloggers. 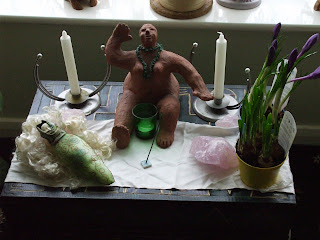 I dressed my altar in honour of the festival and made Brighid's bed using some mohair curls from a friend's goat. doesn't she look cosy there? I made the doll some years ago for Imbolc and it seemed right to place her on the altar this year. I always love to have fresh bulbs for the day. The crocus BTW now have 6 flowers on them,overnight. For me bulbs are a good representation of this time. We plant seeds now and the ground awakens for them. The Goddess is stirring and calling us out of our meditative dark saying "wake up, look around it is almost Spring" 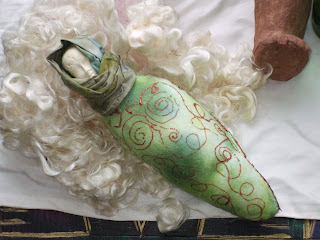 My poem is in honour of Brighid who shares her creativity with all who ask.

BRIGHID
As winter ebbs and the days grow longer
we see light ahead.
The Goddess stirs within the ground
her sleep almost done.
She awaits the call from the Green Lord
as he makes her bower ready

Then a poem I've always loved.

by Walter De La Mare
‘Is there anybody there?’ said the Traveller,
Knocking on the moonlit door;
And his horse in the silence champed the grasses
Of the forest’s ferny floor:
And a bird flew up out of the turret,
Above the Traveller’s head:
And he smote upon the door again a second time;
‘Is there anybody there?’ he said.
But no one descended to the Traveller;
No head from the leaf-fringed sill
Leaned over and looked into his grey eyes,
Where he stood perplexed and still.
But only a host of phantom listeners
That dwelt in the lone house then
Stood listening in the quiet of the moonlight
To that voice from the world of men:
Stood thronging the faint moonbeams on the dark stair,
That goes down to the empty hall,
Hearkening in an air stirred and shaken
By the lonely Traveller’s call.
And he felt in his heart their strangeness,
Their stillness answering his cry,
While his horse moved, cropping the dark turf,
’Neath the starred and leafy sky;
For he suddenly smote on the door, even
Louder, and lifted his head:—
‘Tell them I came, and no one answered,
That I kept my word,’ he said.
Never the least stir made the listeners,
Though every word he spake
Fell echoing through the shadowiness of the still house
From the one man left awake:
Ay, they heard his foot upon the stirrup,
And the sound of iron on stone,
And how the silence surged softly backward,
When the plunging hoofs were gone.
I must also post a wonderful axiom that I read today on a page about Rumer Godden. It was her favourite Indian proverb and seems appropriate to publish on today of all days.
"everyone is a house with four rooms, a physical, a mental, an emotional and a spiritual. Most of us tend to live in one room most of the time but unless we go into every room every day, even if only to keep it aired, we are not a complete person".
Thanks go to Cottage smallholder for reminding me of her:)
Oh and to celebrate Imbolc properly the earth is wearing a gown of snow here in North west England
at February 01, 2009

I have posted a poem on my blog today and asked others to do the same. I have sent them to your blog also so I hope that you have good turnout.

You can find me at

I have posted the poem Winter: My Secret by Christina Rossetti.

May we all have a most poetic day!

I have read so little de la Mare - I'll change that.
thanks for visiting, too!

thank you! The photos are poetry too!!

Lovely to meet another fibre-loving goddess this Imbolc! Thanks for sharing your craft of word, image and fibre.

I love your altar =D. And your dolls make me smile - thanks!

There's at least one poem published on my blog (James Agee). I'm adding an original poem next.