It is freezing again today but the sun helps to brighten the day. We have had a trip along to the next town for some shopping. We called in the charity shop to donate 2 Wedgwood plates for them to sell
While there I had to have a look at what was in of course:)
We came away with 2 teddies, one a jaunty looking character in pants 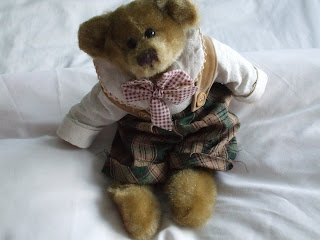 Just look at that face:) 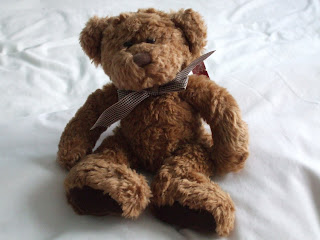 second one still had his tags on 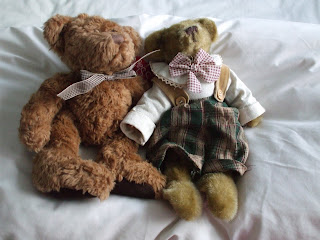 Total for both bears £1, yes just 50p each. I don't know why I had to have them, not something I normally collect, I think that Laal Bear person might have had something to do with it.
anyway enough of the sentimentality, I've finished a pair of socks. I deliberately made them different as I love to wear unconventional things and I know the recipient is a little that way inclined as well. 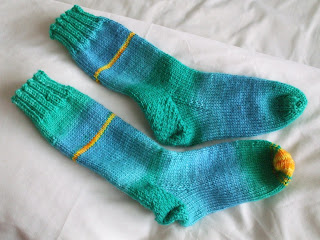 As I mentioned the other day we went for lunch with the Bears, I picked out a couple of yule tree gifts for my grandsons and Mr Mog and I thought we better have one also. 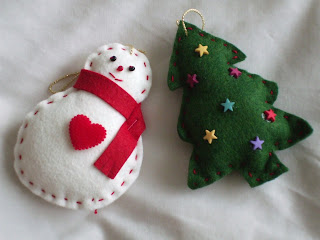 Mr Mog chose the snowman who he thinks is female from the face:). I chose a tree.. Aren't they sweet? If you are in this country they can be purchased from the Laal Bear, she has a few different styles.
at December 05, 2008

It makes a change me luring you.
you're spending to much time with Bears :0) . Thanks for the plug about my decs . U x

Oh those bears are so cute :)as are the Xmas deccies.
I agree'odd socks rule '

I'm not a bear collector either but the one in the pants is just too cute.