I know who my SP is:))) and more sock knitting, plus Hospice shawl update 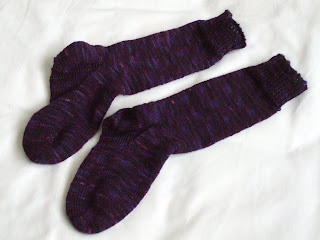 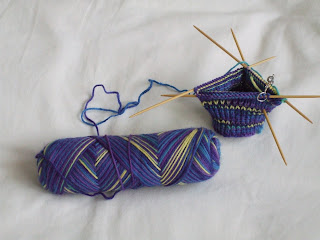 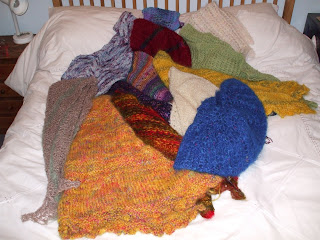 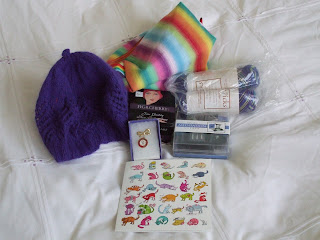 Phew lots to write about:) Firstly I received my final SP11 parcel and found out who had been spoiling me. Yvonne has been gifting me this past few months:) The final parcel was no exception, Yvonne's thoughtfulness continues to the end. Can you see what is in the package? A beautiful soft beret, knitted by Yvonne herself. I haven't had a beret since school and it is a lovely one to wear:) A sock knitting bag that had chocolates in it, sadly they seem to have disappeared;) A bath soap fig and cherry that smells good enough to eat:) Meditation kit that Mr Mog has claimed:) A K&CG pin for me, a moggie card and 2 skeins of Knitpicks merino for socks that feels like velvet it is so soft. It knits well as you will see in the pic above:)
Yvonne you helped me get through a very dark period with your emails and packages, I count my self very lucky to have had you as my SP. Thank you and watch the mail:)
I've finished the socks in Liz's sock yarn knitting on the green picture doesn't really do this yarn justice. It is the velveteen shade. A lot darker than it looks in the etsy site but gothic:) I'm keeping these as for some reason I made them a little too small for Mr Mog:)
I've started a pair in the knitpicks from Yvonne as you can see and this colourway is so vibrant after the velveteen:)
Finally my Lunar year of shawls for the hospice is complete:) Phew 13 shawls in 13 lunar months, I'm taking them to the hospice on Monday but thought you'd like a little pic of them on the bed.
My next long term project? Yes I've come up with one and it's all Yvonne's fault:) I'm doing a lunar year of socks for the hospice next. Starting with January's moon:)
See I can't let them go now I started, can I?
Thanks BTW to all who helped the destash. I'm hopin g to take Mr Mog to Glastonbury for early January. I wanted to take him for the Yule celebrations next week but realistically we can't. He is a lot brighter than he was but still sore and tired. Also the weather forecast is awful and we have so much on with nearing Christmas. So January before the radiotherapy seemed best. Anyway it is always a little flat after the celebrations so this will help.

Gorgeous purpleness! You are turning into a real sock addict - hooray! Have a fab time in Glastonbury!

What a wonderful achievement knitting all those shawls! And now you have set yourself another goal - Socks!!! This time last year could you imagine making that commitment?!

The Knitpicks yarn looks gorgeous, i wish they shipped here or we could get something similar.

Hope you and Mr Mog enjoy Glastonbury - I was nearby a few weeks ago. Enjoy the Solstice!

BTW what about asking for sponsors for your hospice socks (to provide the sock yarn.

I will start it off. Please pick some from my Etsy Shop or I have just got some more 6py Opal which I haven't listed yet (I like knitting this, it is just that little bit thicker)

Hugs to you and Mr M.