Wonder of wool and the art of stitch if you wondered what the title meant. But also Wow  as in what a great day we had. We very nearly didn't go because of  Mr Mog being quite ill yesterday.  A dreadful night was had by both as he really couldn't keep a settled temperature and varied from freezing with shivers to red hot with shivers.
However this morning he was insistent that he wanted to go to Penrith to meet up with many friends who were also going to the fair.
I drove, the first time in quite a while and although it was quite a nervy journey I managed it ok:)
This was the first time we had been to Rheged and what a surprise it was, far bigger than I expected. From the minute we arrived we were surrounded by friends and fellow yarn addicts. It was wonderful to see so many smiling faces, some of the people I had only spoken to online and putting faces to names was fun.
We didn't go into the exhibition . To be honest the fair itself was more than enough and poor Mr M was very shaky and tired with it all. He assures me that it did him the world of good being among friends though so that is good.
What did we see?
we saw these:- 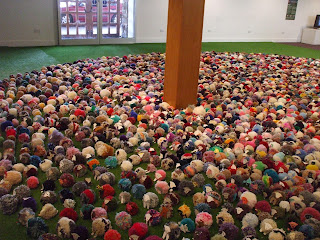 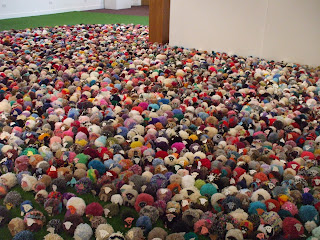 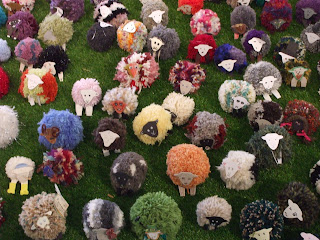 We also saw plenty of yarn and fibre. The hall was full of colour and very inspiring.
What did I buy?
A lucet, never tried one of these before but Graham on Coastal colours stand was playing with one when we went by and I was intrigued. It is easy to use one and a great way to use up oddments of yarn as well. Coastal colours were new to me but the yarns were lovely, he has a great eye for colour and I am sure they will do well. They were both chatty and very friendly and this was their first fair. I'm certain it won't be their last.
I found a lovely oak shawl pin on Ripples crafts stand. Helen always has interesting things to see, not just yarn and fibre. I managed to resist the fibre as I am waiting for when she goes to Wonderwool Wales.
That would have been it on purchases if we hadn't spotted some braids of fibre at the corner of Krafty Koalas stand. Mr Mog  chose some Wensleydale and I found some BFL.

While eating lunch we caught up with Angela and her husband,  Rebs, Tattyknits, Lob and many many more. Angela and her husband Paul gave us all pens which Paul had made and mine is oak:) He also makes the most fabulous buttons and I had to buy 2 of them. A large one for a hat I think and a smaller one for a bag.
There were friends from both guilds we now go to and the one we used to attend. Just a wealth of lovely people and so much positive energy forthcoming.
I loved the mix of stands, there was something for everyone. Lots of felting and information on courses if you wanted to make the things you saw.. Fibre and fleece for those who spin and felt, then yarn of every colour and fibre from merino through to stainless steel. I was tempted to try some stainless steel Habu but didn't. Maybe another time. There was a bookseller with old books and magazines including old vogue magazines from the 1930s. It is always nice to go to these events and to chat with the friendly stall holders. They never push you to buy but are very knowledgeable if you just want to ask about something. I think when you see them working on craft items and smiling you want to go over and ask what they are making or just say hello. If Rheged put this event on again I'd recommend a visit.

We have so few of these big events down south.

It looks fantastic - if that collection of pompom sheep is the one that was made nationally, if you look carefully you will see two with faces I did at our Guild's FOTCR™ party last year! (it was a group effort and faces was more my thing than winding wool round carboard circles!)

That's quite the sea of sheep!