It has been a squally week or two chez moggie, very wintery weather and much colder than normal.
I've also been feeling pretty grotty and have now been diagnosed with late onset asthma. This particularly affects me more in the morning which is a nuisance as I struggle to move around then anyways. I've been prescribed steroids, Now steroids and I have a long long history we go back over (well over) half a century. I know they are excellent for some diseases/ailments but I hate the side effects of them. It would seem now that they prescribe them in a different way than previously and I have been given a two week course. This apparently stops all the weaning off and the side effects. I hummed and aahed about taking them because of previous problems but decided it wasn't going to get better without the help of these tiny pills.
I'm feeling somewhat easier(except in a morning) and the pills plus inhaler appear to be helping.
Watch this space.
It has made things rather fraught for us both but yesterday Mr Mog reorganised one of our altars as you will see below and that has lifted my spirits:) I love the effect of floating candles when they reflect in crystals. 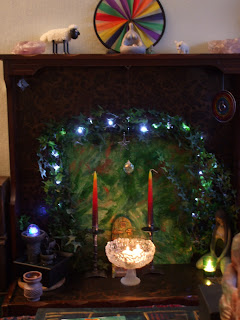 Now onto the wheels. I'm destashing my 2 timbertops wheels as I am getting a suzie pro.
These are original Williamson wheels from the 70s. Both numbered/dated and in excellent working condition. The first is a timbertops Leicester in yew
second is a Timbertops thurmaston 18inch wheel in oak. Both spin beautifully but in a small house I need a smaller wheel so these have to go.

I swear that 'late onset asthma' is the latest 'diagnosis' in anyone over 50. You're the third person in as many weeks I've heard of! Anyway, hope the steroids work.

Have you thought that it might be caused/exacerbated by a food allergy/intolerance? One of my Patchwork Ladies got such a diagnosis last year and was very sceptical. I dowsed what it might be and was told an allergy to tomatoes - she stopped eating them in all their forms and lo, she got better. In fact, she's felt better than she has for years and has now also stopped taking several other prescribed medications!

Lovely altar! Sorry to hear about the wheeziness.

sorry to hear you are having more problems~my swampy has asthma so i know how difficult it can be.

I would love to have the timbertops Leicester wheel but I think it is way over my budget.

Sorry you are feeling rough. I noticed on ravelry that you are fave-ing lots of complicated lacey shawls - is this your new obsession? It's a good one! I am getting lots of ideas from you! Thanks for your comment on my blog. :)