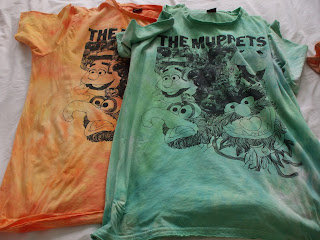 It has been a very painful week both for Mr Mog and for me. Poor Mr Mog has been for xrays as he is having lots of pain in his hip and leg. We will have the results Tuesday. The painkillers doctor prescribed aren't doing much at all for him.
I'm really sore all the time and my pills aren't doing much either.
anyway enough of the moaning I thought you would like to see some pictures.
The 2 Muppet tshirts above are for Mr Mog. He loves the Muppets and Animal:) We bought white ones as that was all they had and we got out the trusty dye pots to make them more into a Mr Mog colour. What do you think? 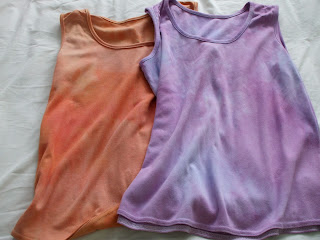 The two tops above are mine. One was off white the other white and I too wanted colour so they went into dye tubs as well.
The full moon was on Tuesday and I managed to get some pictures both the days before and on the night itself. 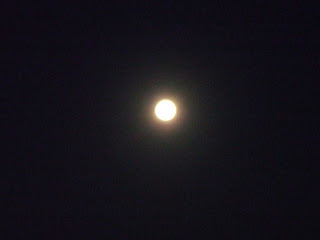 Love the misty effect around her 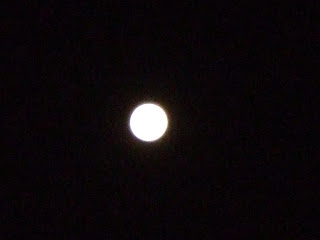 We purchased several sets of solar lights a few months ago and I thought you would like to see the effect in the garden. 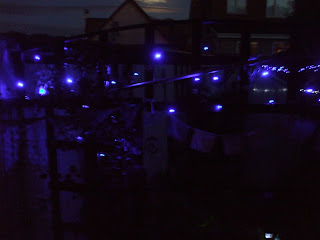 This snap almost looks like flying birds with their own power source:) 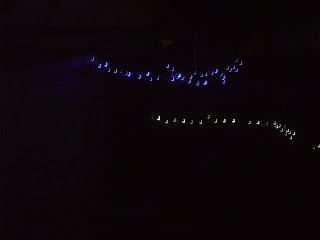 There is something very powerful about the moon this time of the year especially. I can feel the energies swirling around. 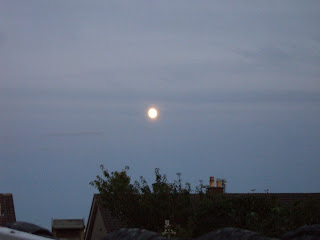 I also have a couple of finished shawls to show you, both made with my own handspun.
This first one is shaelyn, a lovely easy knit. Please note it has sections of lace and I didn't have to frog it once:) 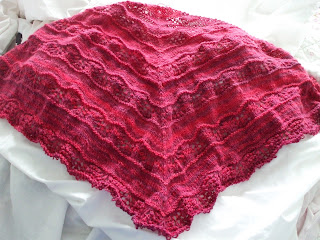 This was a stashbuster shawl, pattern is Harry I think. Used up 2 colours of my handspun. Is very soft and is very large. 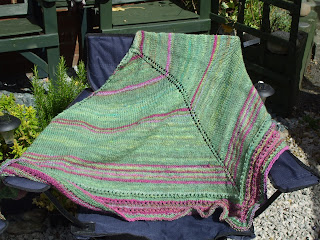 I hope you and Mr. Mog start to feel better soon. As for those T-shirts: groovy, man, groovy.

The lace shawl is beautiful.
The moon has been beautiful this month.

I love the shawls and the t-shirts. But I especially love the orange on your blog. I don't know why but I'm in an orange mood and my happiness meter went through the roof when I clicked on your blog.

I'm sorry you both are in pain. Chronic pain just takes so much out of you. I'll light a candle tonight for both of you and send as much healthy energy your way as I can.

hello, all this beauty even through the pain:)i hope it eases soon, for you both. nice tshirts..especially the purple.. moon pics are great too, she has been avery intense one this month, hasnt she?