Long time no speak. It has been a roller coaster time for various reasons.
The main one being Mr Mog's hospital appointment. Supposedly to discuss which trial to start on and to tick boxes as Oncologist said on his month of extra hormone treatment. 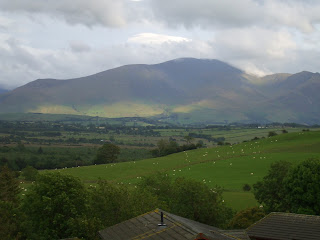 We started to discuss trials and then she said she better check his latest blood test to add to the form, it wouldn't be different she assured us but she had to check.
Well guess what? The PSA had gone down. Oncologist was astonished to say the least and reiterated that that shouldn't have happened. You are weird she informed Mr Mog. I wouldn't exactly call him weird, just different. I told her it was all the positive thoughts and well wishes being sent from around the world. 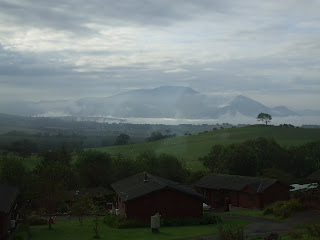 At this point she said he had better go away and continue on the 2 lots of hormone treatment. Mr Mog has to go back every month for blood tests and check up and if he gets any other symptoms or becomes tired he has to go and see them immediately. But we don't care:) We know it hasn't been cured but to be honest every week without chemo etc is a brilliant week. 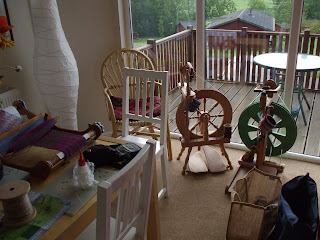 We had our very first weeks holiday  and broke it for one night to attend Mr Mog's appointment as it was at 8.30 in the morning. The pictures you see are from that week. We stayed in a log cabin in Cumbria and it was amazing. Views of the mountains and mainly Skiddaw and a long view down to Bassenthwaite Lake. As you can see we took things to do over the week. We had rain for some part of every day but it didn't matter we were content to be in the cabin watching the ever changing views. 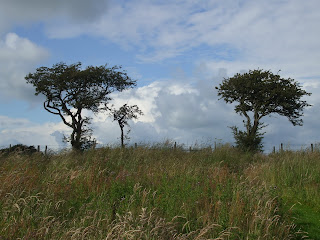 We didn't go too far just one trip to Samye Ling Buddhist centre and a couple of trips into Keswick and Cockermouth. We had friends came over on 2 nights and we went out with a large group of friends on another evening. 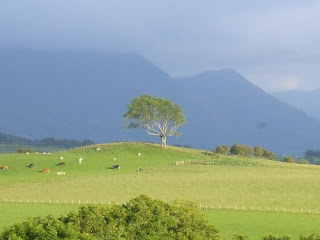 We came back to gorgeous sunshine of course. It wasn't until the 3rd day of our Holiday that we realised why there was so much rain. It was Keswick Convention and it ALWAYS rains for that:) 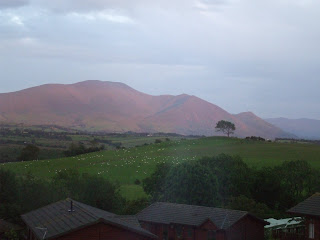 We came back with several alpaca and Jacob fleeces as well. 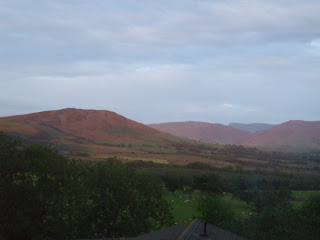 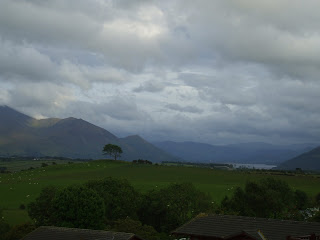 I think I may have mentioned that I took up spindling recently? I was so thrilled with my Holly spindle from Jenkins that I wanted an oak one to balance the year. It arrived today and is just as beautiful as the Holly one 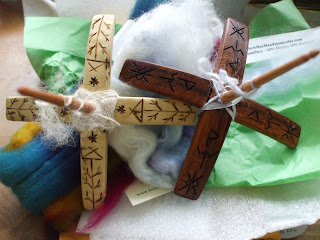 I love colour and when a friend of mine came over a few weeks ago with a sturdy large project tote I asked where it was from. Picperfic is a person of many talents:) She spins, dyes and sews to name but a few. I wanted a bag large enough and sturdy enough to carry knitting, spindling, ipad, phone, pills and other assorted stuff.
This is what Marianne came up with for me. 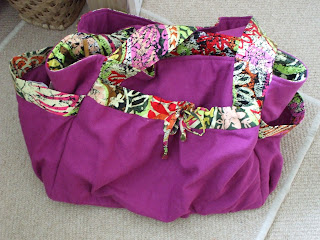 Now for the rainbows of the title. I posted pictures a while ago of stuff I had  acquired from a friend of mines new Etsy shop. TattyFleece is a fairly new dyer and specialises in rainbows:) I first of all got this, a Wensleydale Boa. You can wear it , spin it or felt it. Multi purpose clothing:) I also purchased some bags of rainbow curls. 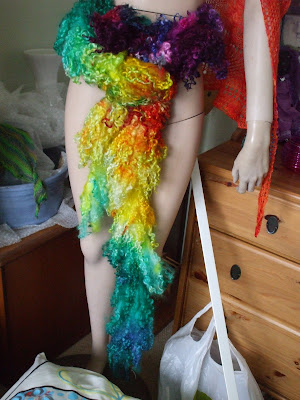 Then  last week I was sent a gift of a new shawl pattern on Ravelry Iris Goddess of Rainbow shawl. I mentioned in passing how it would be great to knit this in rainbow yarns.
Just look what the talented Tatty came up with:) Absolutely perfect for  the goddess of rainbows. It is Blue faced Leicester sock yarn and there are approximately 400 metres in each skein. Well a Goddess needs a spectacular shawl don't you think? 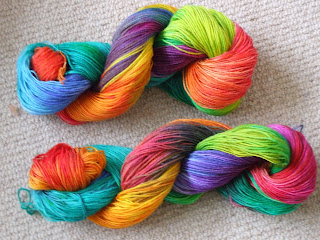 Watch this space for the results. If you are in the market for rainbows do check out Tatty's Etsy site. There isn't any rainbow yarn on at the moment but you could always ask I am sure she could be persuaded:)
Email Post
Labels: cancer lakes mountains rainbows

Lynn said…
Woo hoo, what amazing news!!! Thank Goddess for the blessing to you both. I love the rainbow yarn,and am going have to check out some of those sites you mention. The vacation looks relaxing and wonderful. Will continue to keep you and Mr. Mog in my prayers. Blessings, Lynn
8:50 pm

Leanne said…
Firstly- wonderful news re: Mr Mog, not a cure as you say, but wonderful nonetheless. Your Cumbria photos are beautiful, just look at the colours in the land!! Well done on ordering the oak spindle, Holly and oak, perfect, in balance! :-)

and lastly- rainbows! suddenly to scroll down to that burst of colour, it really made me smile!

blessings as always, Leanne x
7:25 am

laoi gaul~williams said…
now that really is great news!
sending even more positive vibes up to you :)

i am glad you had a nice time away~i adore the lakes and still wish my dad lived up there, although thats a rubbish reason not to go!

now you are home i can tell you that my femme arrived and has made herself at home~next week she is packing her bag and making a journey to Glastonbury and Avebury :)
11:28 am

Blue Witch said…
Good news, and I love the views.

A lad I taught for 4 years (but haven't seen for over 4 years now) unexpectedly knocked on our door last night. He was out cycling about and found himself in our lane. He's just left school, and walked straight into a job as a mechanic apprentice, something he's wanted to do for many years. I congratulated him on his achievements, and commented that he'd come a long way from the timid boy who had no confidence and thought he'd never learn to read, that I first met when he was 8. He said, "I still hear your voice in my head every time I think I can't do something - you're there saying 'PMA, positive mental attitude, no such thing as can't!'" So true...
4:06 pm

Leanne said…
How odd, I left a comment this morning before going to work but its not here,I cant remember all i said now either! So - fab news re Mr Mogs blood test results, I love cumbria, the colours in the photos are beautiful! well done on the oak and the holly- all in balance!! and the rainbows? well so cheerful- made me smile!

Becks said…
Great news about the blood tests, hoping the news stays positive for lots longer.
The rainbow yarn is gorgeous, will be watching out for more posts on this :)
xx
6:56 pm

Heather Woollove said…
What wonderful, colorful purchases! I love the new tote bag, too.
1:24 am

Leanne said…
Hello Amber, its been a few weeks since you posted, just wanted to check you are alright? You have my email addy if you need to talk 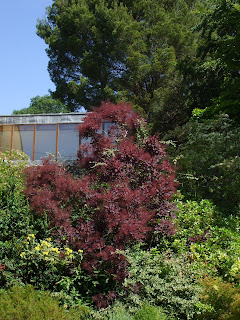 Chalice Well what about the pagans? 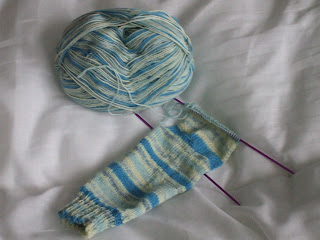